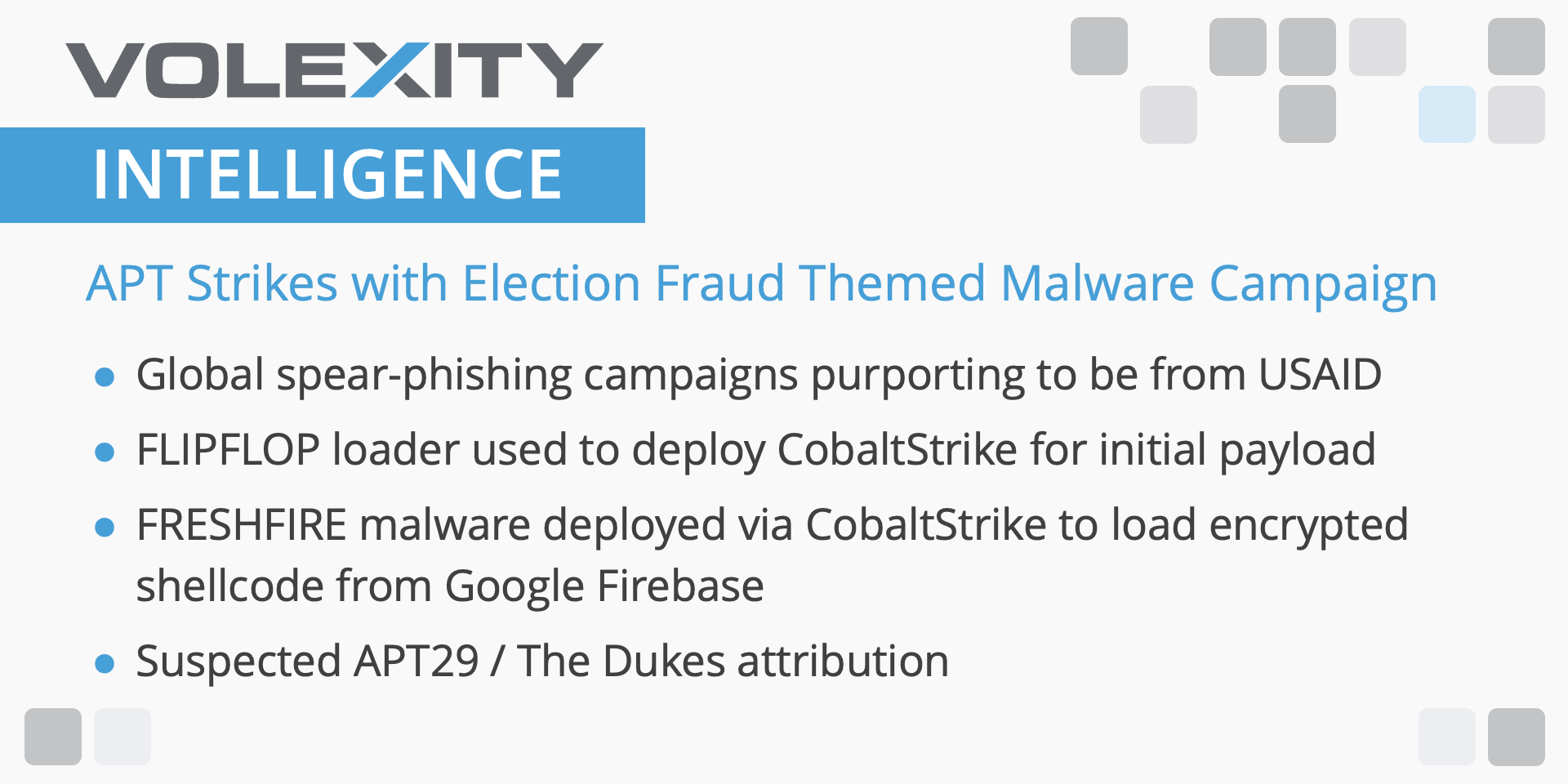 On May 25, 2021, Volexity identified a phishing campaign targeting multiple organizations based in the United States and Europe. The following industries have been observed being targeted thus far:

This blog post provides details on the observed activity and outlines possible justification that this campaign could be related to APT29. 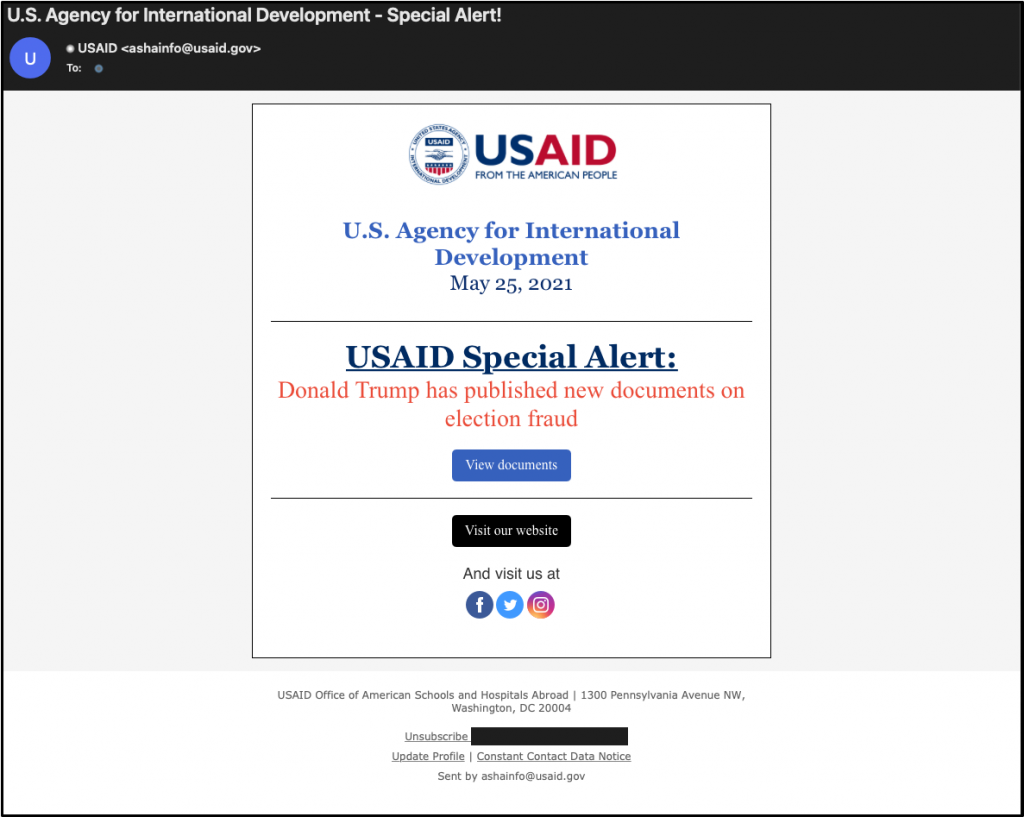 Volexity also observed a smaller campaign from the same sender with largely the same content several hours earlier, but with the subject line "USAID Special Alert!". Most of the hyperlinks in the e-mail are of the following format.

While each link was consistent in a given e-mail, parts of the e-mail varied.

The “rs6.net” domain is used by Constant Contact e-mail marketing software to track click-throughs on links, meaning the attacker should be able to map the success of their campaign. On the newsletter page of USAID's website, their sign-up link is through Constant Contact. As a result of using this software, the attacker is able to generate a more convincing spear-phish e-mail. Additionally, the e-mail appears to originate from USAID; however, news-related e-mails from this organization are traditionally sent via the [email protected] e-mail address.

When a recipient clicks the Constant Contact URL referenced above, their network request will be redirected to the following URL:

This network request will initiate a download for the malicious ISO file “ICA-declass.iso” to the victim's system. The same file is delivered to every user irrespective of their e-mail or referring URL.

The malware in question is provided as an ISO file, which acts as a container for embedded files. This ISO has the following properties:

ISO files are similar to archives and can contain several embedded files. They have been popular with criminal threat actors as alternatives to ZIP and RAR files for some time. The following files were present within the ISO:

The PDF file appears to have been pulled directly from the dni.gov website and acts as a decoy; its contents are shown in Figure 2. 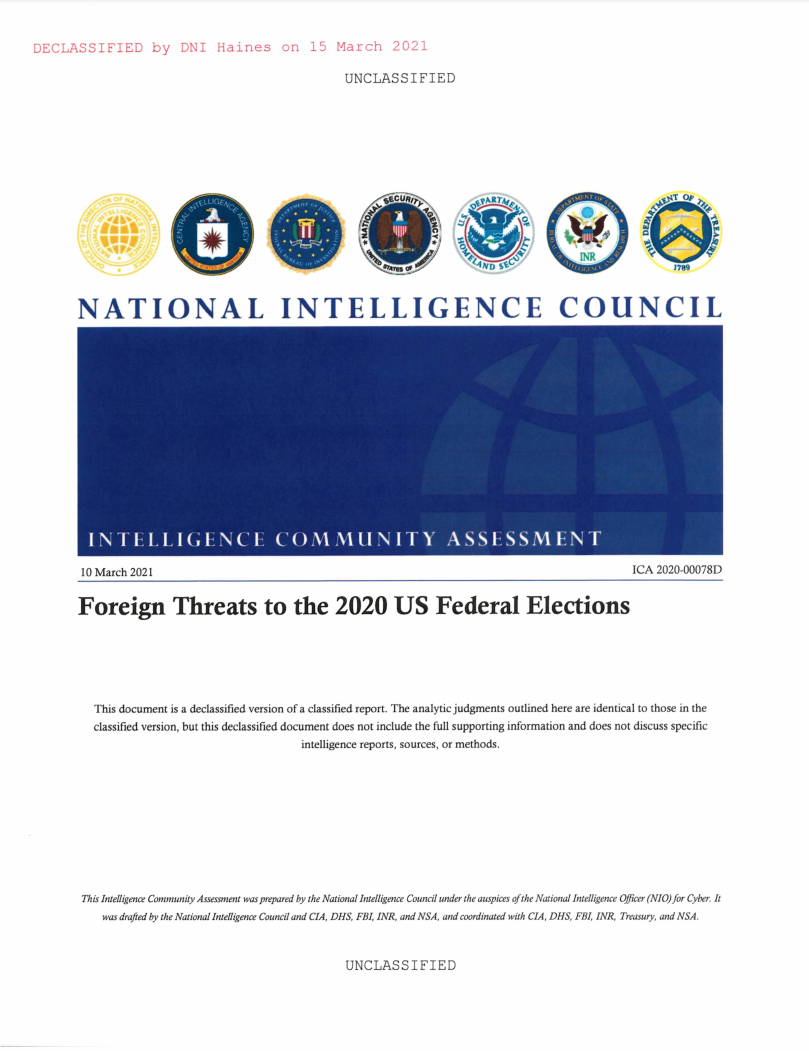 If a user opened the embedded LNK file, it would run the Document.dll file and use its exported function “Open”.

It should be noted that nearly all of the metadata from the LNK file has been removed. Typically, LNK files contain timestamps for creation, modification, and access, as well as information about the device on which they were created.

The DLL included in the ISO has the following attributes:

While the PDB string contains the Korean word for “develop,” Volexity does not believe Korean-speaking threat actors or developers are responsible for this malware family. Volexity instead believes this to be a false flag. Additionally, the compile timestamp dating to the year 2019 is likely to have been falsified.

The DLL is equipped with a number of anti-sandbox and anti-vm checks based on the presence of registry keys commonly found in Virtual Machine environments, as shown in Figure 4: 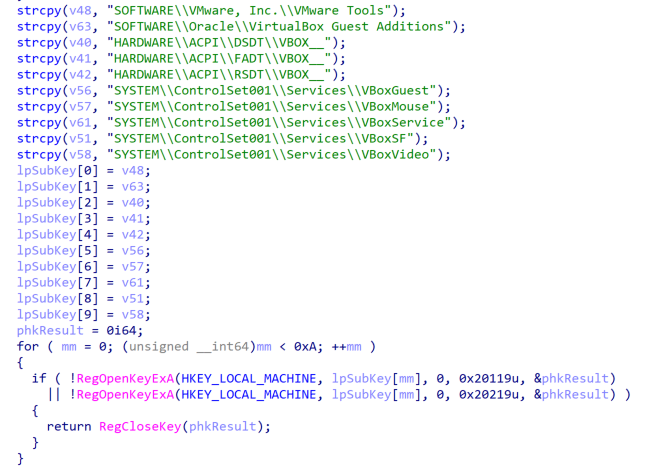 After these checks are passed, the malware de-obfuscates a payload by flipping the order of bytes within it. Once de-obfuscated, the payload is executed within the same process. The final payload is CobaltStrike Beacon and contains the following configuration options:

Volexity has encountered a secondary DLL payload downloaded by the attacker after successful infection with CobaltStrike. This malware family, which Volexity has named "FRESHFIRE", uses specific attributes on the infected hostname to decrypt and execute data received from a remote C2 server.

This second-stage DLL has the following attributes:

The exported function "WaitPrompt" of this DLL launches the malicious behavior. The malware begins by attempting to open a mutex with the name "UlswcXJJWhtHIHrVqWJJ". If this mutex already exists on the system the malware will exit, otherwise it will proceed. The malware then queries the file attributes of the file "C:\dell.sdr" and appends data from these file attributes to the above mutex name. This combined string is then hashed with MD5 and used to generate a Triple DES decryption key.

The sample then uploads a timestamp to Firebase and downloads a blob from Firebase storage. This data is base64 decoded and decrypted using the generated key. Then, the data is executed in a separate thread, and an HTTP DELETE request is sent to the Firebase storage address used to download the payload.

The following URLs are observed in use by this malware:

Volexity was able to capture an encrypted payload from the Firebase URL and are currently in the process of analyzing it.

While Volexity cannot say with certainty who is behind these attacks, it does believe it has the earmarks of a known threat actor it has dealt with on several previous occasions. However, a number of attack attributes are consistent with previous tactics used by APT29:

Notably, in the 2018 case, FireEye highlighted the same MAC address had been used to create the LNKs observed in 2016 and 2018, while the newest LNK detailed in this blog post has had this metadata scrubbed. This is perhaps an indication that the attacker is learning from public reports on their work.

From an infrastructure point of view, the domains used bear some similarity to the Dark Halo campaign reported by Volexity. In the case of Dark Halo, domains were bought at auction or through marketplace transactions which meant they appeared to be created long ago in WHOIS records. This is the case again with the domains used for command and control in these attacks. Following the Volexity publication, it has been alleged that the Dark Halo campaign was also the work of APT29; however, Volexity has not reached that conclusion at this time.

Volexity cannot be completely certain this new activity is the work of APT29, but it is believed with moderate confidence that it is.

Volexity believes the APT29 threat actor is likely responsible for a phishing campaign against numerous organizations within the United States and Europe. It is currently unclear how many organizations have been targeted, but several of Volexity's customers—as well as a number of organizations submitting to VirusTotal—have been attacked.

After a relatively long hiatus with no publicly detailed spear phishing activity, APT29 appears to have returned with only slight changes to its historical TTPs. In this instance, the attacker purports to be from USAID, enticing victims into clicking an embedded file to download and execute a malicious ISO file. In doing so, the CobaltStrike Beacon implant is executed, providing remote access to the attackers.

At the time of writing, all files involved have relatively low static detection rates on VirusTotal. This suggests the attacker is likely having some success in breaching targets.

Organizations are encouraged to perform the following actions to protect against this threat: