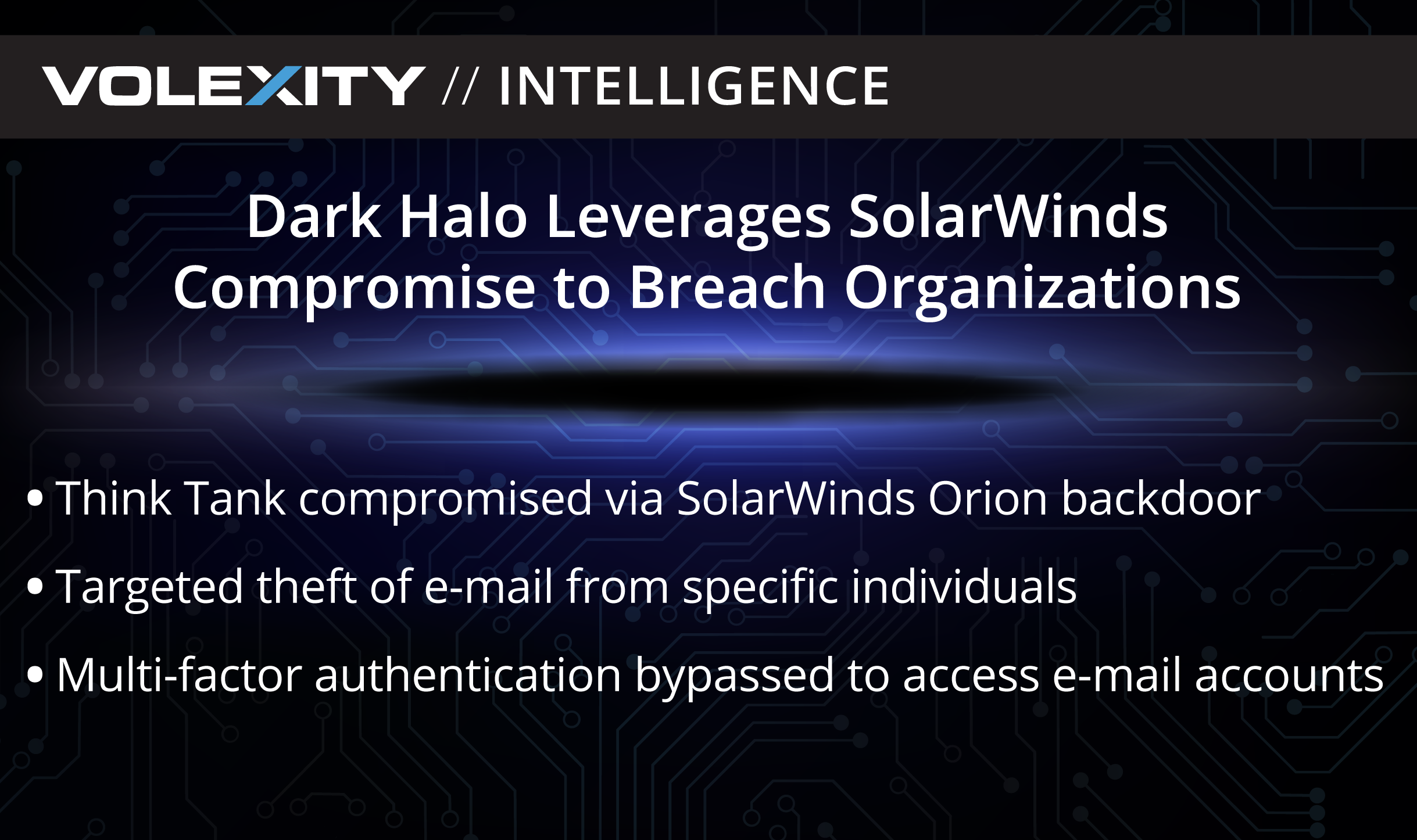 Volexity is releasing additional research and indicators associated with compromises impacting customers of the SolarWinds Orion software platform. Volexity has also published a guide for responding to the SolarWinds breach, and how to detect, prevent, and remediate this supply chain attack.

On Sunday, December 13, 2020, FireEye released a blog detailing an alleged compromise to the company SolarWinds. This compromise involved a backdoor being distributed through an update to SolarWind's Orion software product. FireEye attributed this activity to an unknown threat actor it tracks as UNC2452. Volexity has subsequently been able to tie these attacks to multiple incidents it worked in late 2019 and 2020 at a US-based think tank. Volexity tracks this threat actor under the name Dark Halo.

At one particular think tank, Volexity worked three separate incidents involving Dark Halo. In the initial incident, Volexity found multiple tools, backdoors, and malware implants that had allowed the attacker to remain undetected for several years. After being extricated from the network, Dark Halo then returned a second time, exploiting a vulnerability in the organization's Microsoft Exchange Control Panel. Near the end of this incident, Volexity observed the threat actor using a novel technique to bypass Duo multi-factor authentication (MFA) to access the mailbox of a user via the organization's Outlook Web App (OWA) service. Finally, in a third incident, Dark Halo breached the organization by way of its SolarWinds Orion software in June and July 2020.

The primary goal of the Dark Halo threat actor was to obtain the e-mails of specific individuals at the think tank. This included a handful of select executives, policy experts, and the IT staff at the organization. Volexity notes its investigations are directly related to the FireEye report based on overlap between command-and-control (C2) domains and other related indicators such as a backdoored server running SolarWinds Orion.

Volexity has worked three major incidents involving the Dark Halo threat actor. In most cases, the actor aimed to live off the land, primarily focusing on weekly operations to extract e-mail messages from the organization. Dark Halo did use malware and red-teaming tools but largely only for specific one-time tasks as a fallback mechanism when other avenues of access were cut off. For the purposes of this write-up, Volexity will share novel and useful information from the second and third incidents. The second incident involved a sophisticated way to obtain unauthorized access to an account via OWA that had MFA protection in place. The third incident involved a breach by way of the SolarWinds Orion platform.

Toward the end of the second incident that Volexity worked involving Dark Halo, the actor was observed accessing the e-mail account of a user via OWA. This was unexpected for a few reasons, not least of which was the targeted mailbox was protected by MFA. Logs from the Exchange server showed that the attacker provided username and password authentication like normal but were not challenged for a second factor through Duo. The logs from the Duo authentication server further showed that no attempts had been made to log into the account in question. Volexity was able to confirm that session hijacking was not involved and, through a memory dump of the OWA server, could also confirm that the attacker had presented cookie tied to a Duo MFA session named duo-sid.

Volexity's investigation into this incident determined the attacker had accessed the Duo integration secret key (akey) from the OWA server. This key then allowed the attacker to derive a pre-computed value to be set in the duo-sid cookie. After successful password authentication, the server evaluated the duo-sid cookie and determined it to be valid. This allowed the attacker with knowledge of a user account and password to then completely bypass the MFA set on the account. It should be noted this is not a vulnerability with the MFA provider and underscores the need to ensure that all secrets associated with key integrations, such as those with an MFA provider, should be changed following a breach. Further, it is important that not only are passwords changed after a breach, but that passwords are not set to something similar to the previous password (e.g., Summer2020! versus Spring2020! or SillyGoo$e3 versus SillyGoo$e2).

Many of the technical details regarding the malware used are covered in the FireEye notification. However, in this blog, Volexity can share examples of command-line actions the attacker took after gaining access to the target network and provide insight into additional tools, infrastructure, and attacker objectives.

The attacker was quite adept with Exchange and immediately listed various organization configuration settings via PowerShell. Below are a few of the operations that the attacker executed.

The attacker also made use of a file called sqlceip.exe, which upon first glance might appear as the legitimate version of SQL Server Telemetry Client provided by Microsoft. However, Volexity determined this tool was actually a version of AdFind from joeware.net. AdFind is a command-line tool used for querying and extracting data from Active Directory. During the course of its investigations, Volexity discovered the attacker using AdFind with the following command line:

They also attempted this on a number of machines using schtasks.exe directly. For example:

The attacker created password-protected archives on the victims' OWA server so that they could be exfiltrated via a simple HTTP request.

An example URL for the attacker to collect the exfiltrated data would be:

On disk, this was located at the following path:

Volexity also saw the attacker stage other exfiltration in another folder on the server located here:

Finally, the attacker added their own devices as allowed IDs for active sync for a number of mailboxes using Set-CASMailbox:

After successfully exporting mail they wished to steal, the attacker would remove the evidence of the export request using Remove-MailboxExportRequest:

During the July 2020 incident, Volexity observed at least two indicators that overlapped with indicators of compromise posted by FireEye. The organization's SolarWinds server conducted DGA-style DNS queries under the following subdomain:

The vast majority of queries were met with SERVFAIL responses. In most other cases, the hostnames resolved to IPs that fell in the ranges 184.72.0.0/16, 20.141.48.0/24, 8.18.144.0/24, and 8.18.145.0/24. However, the critical responses to the organization came by way of CNAME responses that occurred between June 30, 2020, and July 16, 2020. These DNS resolutions returned a CNAME for the domain freescanonline[.]com. In late July, the attacker took advantage of their access and started moving laterally throughout the organization, which will be described a bit later. Most notably the attacker pushed malware to other systems that beaconed back to the following additional infrastructure:

At the time of the incident (July 2020), the attacker had accidentally configured their servers to be open to the Internet, accepting arbitrary requests on port 80. Since then, the attacker has fixed this issue; however, at the time, Volexity was able to identify a number of C2 addresses based on server profiling.

Specifically, at the time there were only a handful of servers that responded with the following HTTP headers in the following order:

The "Server" value also specified IIS10.0, but this header order does not match the order used by IIS 10.0.

Based on this pattern Volexity was able to identify the following IP addresses in July 2020:

These IPs hosted SSL certificates for the following domains:

Notably, some of these domains were set up prior to the earlier known compromise date published by FireEye, such as solartrackingsystem[.]net, which was assigned its current nameserver in January 2020. Several of the domains also have very long registration histories going back several years. Volexity believes that attacker obtained these domains through auctions or from registrants after they expired but before they were deleted. This allowed the attacker to use domains with a long history and avoid being detected based on detections tied to a domain being newly registered.

At the time of the investigation, Volexity deduced that the likely infection was the result of the SolarWinds box on the target network; however, it was not fully understood exactly how the breach occurred (i.e., whether there was some unknown exploit in play, or other means of access), therefore Volexity was not in a position to report the circumstances surrounding the breach to SolarWinds. The machines involved in this incident had been rebooted several times prior to Volexity's involvement in incident response efforts, meaning that a great deal of evidence that would have been in volatile memory had been lost.

Volexity believes that Dark Halo is a sophisticated threat actor based on the following characteristics of their attacks:

During the investigation Volexity discovered no hints as to the attacker's origin or any links to any publicly known threat actor.

To protect against these attacks, Volexity recommends the following:

Appendix A - IP and Domain IOCs