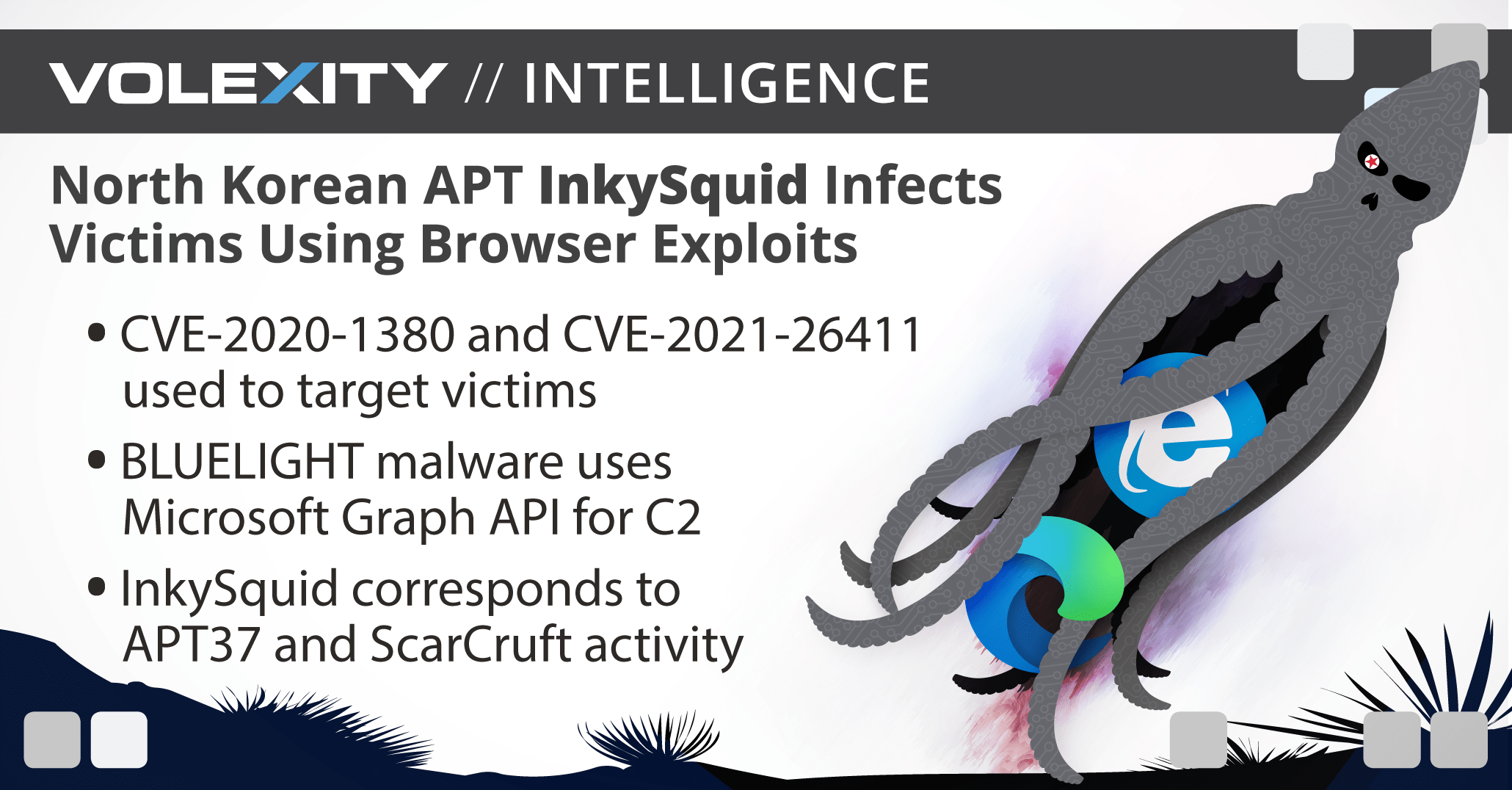 Volexity recently investigated a strategic web compromise (SWC) of the website of the Daily NK (www.dailynk[.]com), a South Korean online newspaper that focuses on issues relating to North Korea. Malicious code on the Daily NK website was observed from at least late March 2021 until early June 2021.

This post provides details on the different exploits used in the SWC, as well as the payload used, which Volexity calls BLUELIGHT. Volexity attributes the activity described in this post to a threat actor Volexity refers to as InkySquid, which broadly corresponds to activity known publicly under the monikers ScarCruft and APT37.

In April 2021, through its network security monitoring on a customer network, Volexity identified suspicious code being loaded via www.dailynk[.]com to malicious subdomains of jquery[.]services. Examples of URLs observed loading malicious code include the following:

These URLs lead to legitimate files used as part of the normal function of the Daily NK website; however, their contents were modified by the attacker to include code redirecting users to load malicious JavaScript from the attacker-owned domain jquery[.]services. The attacker-included code was only added for short periods of time and was swiftly removed, making identification of this activity difficult as the malicious content was not always available.

The first time Volexity was able to identify malicious code being returned, the attacker was observed using CVE-2020-1380, an exploit for Internet Explorer. The attacker added a single line of code to the following legitimate file on Daily NK:

The line of obfuscated code added to DailyNK was as follows:

The effect of this is that if a user visited Daily NK using Internet Explorer, then a page would load an additional JavaScript file from the following URL:

When requested, with the correct Internet Explorer User-Agent, this host would serve additional obfuscated JavaScript code. As with the initial redirect, the attacker chose to bury their malicious code amongst legitimate code. In this particular case, the attacker used the "bPopUp" JavaScript library alongside their own code. This decision has two effects:

One interesting aspect of the exploit code the attacker includes is that many of the strings are obfuscated within variables designed to look like legitimate SVG content. An example of the attacker hiding these strings is given in Figure 1:

In order to decrypt the strings, the following steps are performed:

A Python script to decode these SVG variables is provided on Volexity's GitHub page here.

In total, three fake SVG objects were used. Once the strings from these objects are substituted into the remaining JavaScript, identifying the exploit became easier. A key segment of the resulting code is given in Figure 2: 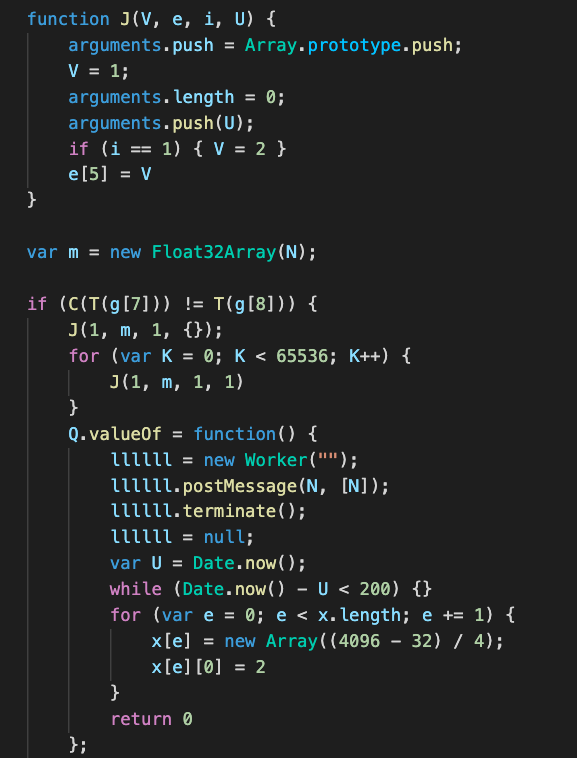 This code corresponds to publicly available proof-of-concept (PoC) code for CVE-2020-1380 that has been well documented by TrendMicro.

Following successful exploitation, the JavaScript decrypts a final SVG variable using the same technique described previously. The resulting blob contains a hex-encoded representation of a Cobalt Strike stager, which is decoded and executed. In this case, the URLs from where it expected to download additional shellcode were as follows:

On another occasion, CVE-2021-26411 was used, which is another exploit targeting Internet Explorer and legacy versions of Microsoft Edge. The redirect code was set up in the same way as CVE-2020-1380, the only difference being the exploit code used. The key part of the exploit code used is given in Figures 3 and 4. It was likely a direct implementation of the PoC code posted here by Korean security company Enki. 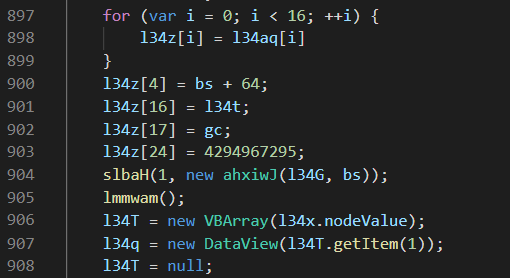 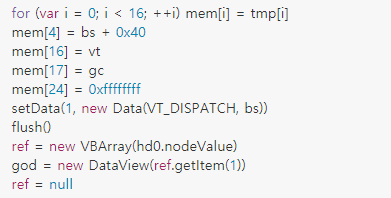 As with the CVE-2020-1380 example, the attacker made use of encoded content stored in SVG tags to store both key strings and their initial payload. The initial command-and-control (C2) urls were the same as those observed in the CVE-2020-1380 case.

On another occasion, the attacker used a different subdomain of jquery[.]services to host a new and novel malware family. The file was hosted at the following location:

The "history" file was an XOR-encoded (0xCF) copy of a custom malware family that both the malware developer and Volexity refer to as BLUELIGHT. The moniker is derived from the PDB string observed in the malware:

It is likely that BLUELIGHT is used as a secondary payload following successful delivery of Cobalt Strike, which was used as an initial payload in both exploitation cases highlighted earlier in this report.

The file analyzed for this report had the following details:

The BLUELIGHT malware family uses different cloud providers to facilitate C2. This specific sample leveraged the Microsoft Graph API for its C2 operations. Upon start-up, BLUELIGHT performs an oauth2 token authentication using hard-coded parameters. Once the client is authenticated, BLUELIGHT creates a new subdirectory in the OneDrive appfolder and populates it with several subdirectories used by the C2 protocol. The following subdirectory names were used:

Once the folder and subdirectories are set up, reconnaissance data is gathered containing the following information, formatted as a JSON object:

The data is XOR encoded into a binary blob and uploaded.  All further reconnaissance and command response data is similarly encoded. This version of the implant used the ".jpg" extension for nearly all files uploaded regardless of their content, with different subdirectories and base filenames indicating different types of command data. The reconnaissance data, for instance, is uploaded to the "logo/title.jpg" path.

With every iteration, the client will also query for new commands by enumerating the children of the "background" subdirectory. The name of the file indicates the command to perform, with the contents of the file providing further command-specific information. The following commands are supported:

Command files are deleted after being processed. Result files for most commands are uploaded to the “round” directory; however, the ZIP upload uses the “theme” subdirectory.

While SWCs are not as popular as they once were, they continue to be a weapon in the arsenal of many attackers. The use of recently patched exploits for Internet Explorer and Microsoft Edge will only work against a limited audience. Attackers will still have some success, however, and have a good chance of avoiding detection based on the following attributes of their attack:

How is this activity attributed to InkySquid (aka ScarCruft, APT37)? This will be explained further in a follow-up post, so stay tuned!

Related IoCs and signatures to this post are available on Volexity's GitHub page here.