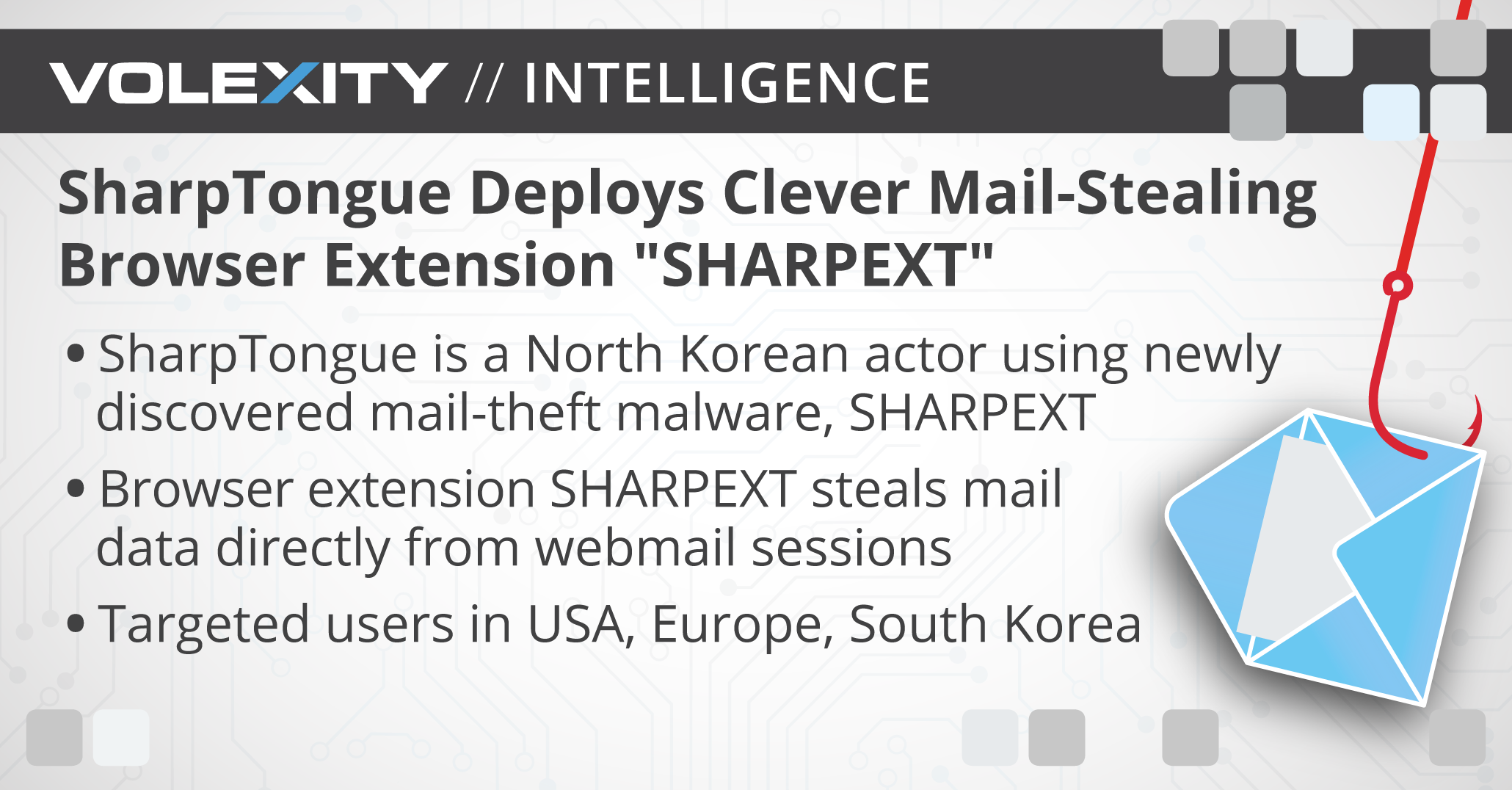 Volexity tracks a variety of threat actors to provide unique insights and actionable information to its Threat Intelligence customers. One frequently encountered—that often results in forensics investigations on compromised systems—is tracked by Volexity as SharpTongue. This actor is believed to be North Korean in origin and is often publicly referred to under the name Kimsuky. The definition of which threat activity comprises Kimsuky is a matter of debate amongst threat intelligence analysts. Some publications refer to North Korean threat activity as Kimsuky that Volexity tracks under other group names and does not map back to SharpTongue. Volexity frequently observes SharpTongue targeting and victimizing individuals working for organizations in the United States, Europe and South Korea who work on topics involving North Korea, nuclear issues, weapons systems, and other matters of strategic interest to North Korea.

SharpTongue's toolset is well documented in public sources; the most recent English-language post covering this toolset was published by Huntress in 2021. The list of tools and techniques described in that post are consistent with what Volexity has commonly seen for years. However, in September 2021, Volexity began observing an interesting, undocumented malware family used by SharpTongue. Within the last year, Volexity has responded to multiple incidents involving SharpTongue and, in most cases, has discovered a malicious Google Chrome or Microsoft Edge extension Volexity calls “SHARPEXT”.

SHARPEXT differs from previously documented extensions used by the "Kimsuky" actor, in that it does not try to steal usernames and passwords. Rather, the malware directly inspects and exfiltrates data from a victim's webmail account as they browse it. Since its discovery, the extension has evolved and is currently at version 3.0, based on the internal versioning system. It supports three web browsers and theft of mail from both Gmail and AOL webmail.

This blog post describes how SHARPEXT works, how the extension is loaded into browsers, and how the different components work together.

SHARPEXT is a malicious browser extension deployed by SharpTongue following successful compromise of a target system. In the first versions of SHARPEXT investigated by Volexity, the malware only supported Google Chrome. The latest version (3.0 based on the internal versioning) supports three browsers (Figure 1):

The first two browsers are commonly used around the world, but the third browser, “Whale”, is less well known. Whale is developed by Naver, a company located in South Korea; it is used almost exclusively by people from South Korea. All three browsers are based on the Chromium engine, so this additional support likely did not require substantial additional development by the attacker.

Prior to deploying SHARPEXT, the attacker manually exfiltrates files required to install the extension (explained below) from the infected workstation. SHARPEXT is then manually installed by an attacker-written VBS script. The workflow of the installation script is as follows:

The full contents of the VBScript are shown in Figure 2.

In summary, the following information must be gathered by the attacker to generate a file that will be accepted by Chromium-based browsers:

The attacker uses these files to create new Secure Preferences and Preferences files which will be accepted by the browser upon deployment (and retain the existing settings configured by the user, avoiding any confusion on the users’ part). Figure 3 shows the new content added to Secure Preferences to load the extension and its parameters. 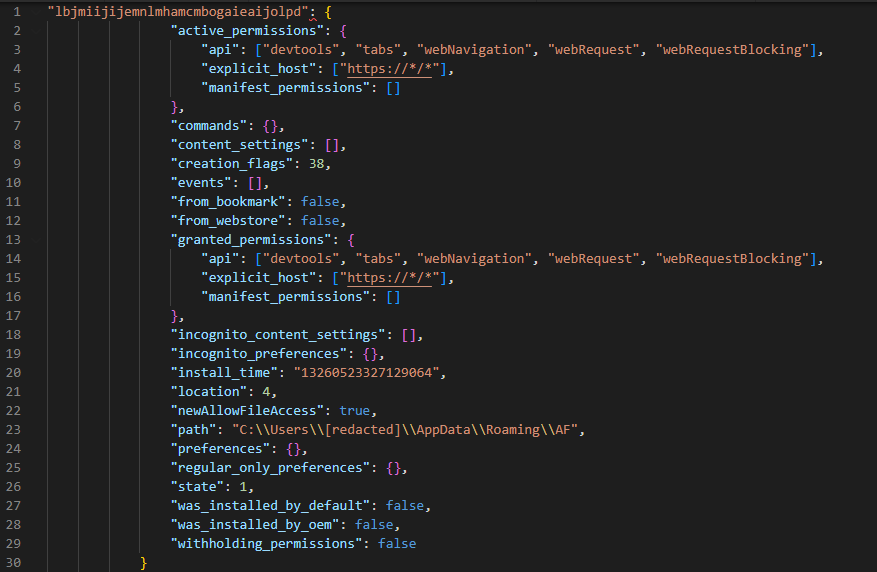 With the modified preferences files in place, the browser will automatically load the malicious extension located in folder “%APPDATA%\Roaming\AF”. The extension mostly relies on the "DevTools" permission, which is set in the extension's settings (see Figure 1).

The second PowerShell script (dev.ps1) is described in the next section.

The second PowerShell script deployed by the installer, dev.ps1, is used to enable DevTools within the browser tab accessed by the user. The script runs in an infinite loop checking for processes associated with the targeted browsers. If any targeted browsers are found running, the script checks the title of the tab for a specific keyword (for example “05101190”, or “Tab+” depending on the SHARPEXT version). The specific keyword is inserted into the title by the malicious extension when an active tab changes or when a page is loaded. Then, the script uses a handle to the foreground window to send keystrokes, as shown in Figure 4. 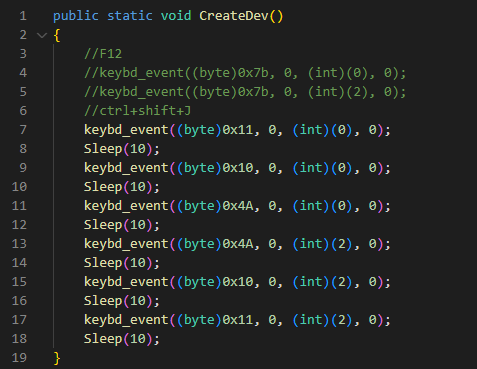 The keystrokes sent are equivalent to Control+Shift+J, the shortcut to enable the DevTools panel. Lastly, the PowerShell script hides the newly opened DevTools window by using the ShowWindow() API  and the SW_HIDE flag. At the end of this process, DevTools is enabled on the active tab, but the window is hidden.

In addition, this script is used to hide any windows that could alert the victim. Microsoft Edge, for example, periodically displays a warning message to the user (Figure 5) if extensions are running in developer mode. The script constantly checks if this window appears and hides it by using the ShowWindow() and the SW_HIDE flag.

The DevTools module is composed of two files: dev.html (automatically loading each time DevTools is enabled) and dev.js (loaded by dev.html). The purpose of the module is to send two types of messages to the component #3 (described in the next section):

The main functionality of the SHARPEXT extension is located in a file named “bg.js” in the root directory. In earlier versions, the functionality was included directly in the extension. In newer versions, however, most of the code is stored on the C2 server; it is downloaded and passed to an eval() statement at the point of execution. This technique of loading the functionality from the C2 at runtime has two main benefits to the attacker:

The internal mechanism of the extension can be divided into two parts:

Each part is further described below.

The purpose of the tabs listeners is to change the window title of the active tab in order to add the keyword used by dev.ps1, the PowerShell script described previously. The code appends the keyword to the existing title (“05101190” or “Tab+”, depending on the version). The keyword is removed when DevTools is enabled on the tab.

The runtime messages listener is used to handle the message sent by the DevTools module described in the previous section. The extension can receive two types of messages:

The purpose of the response parsing is to steal email and attachments from a user's mailbox. The extension can generate web requests to download additional email from the web page. An example of AOL request to retrieve additional emails is shown in Figure 7. 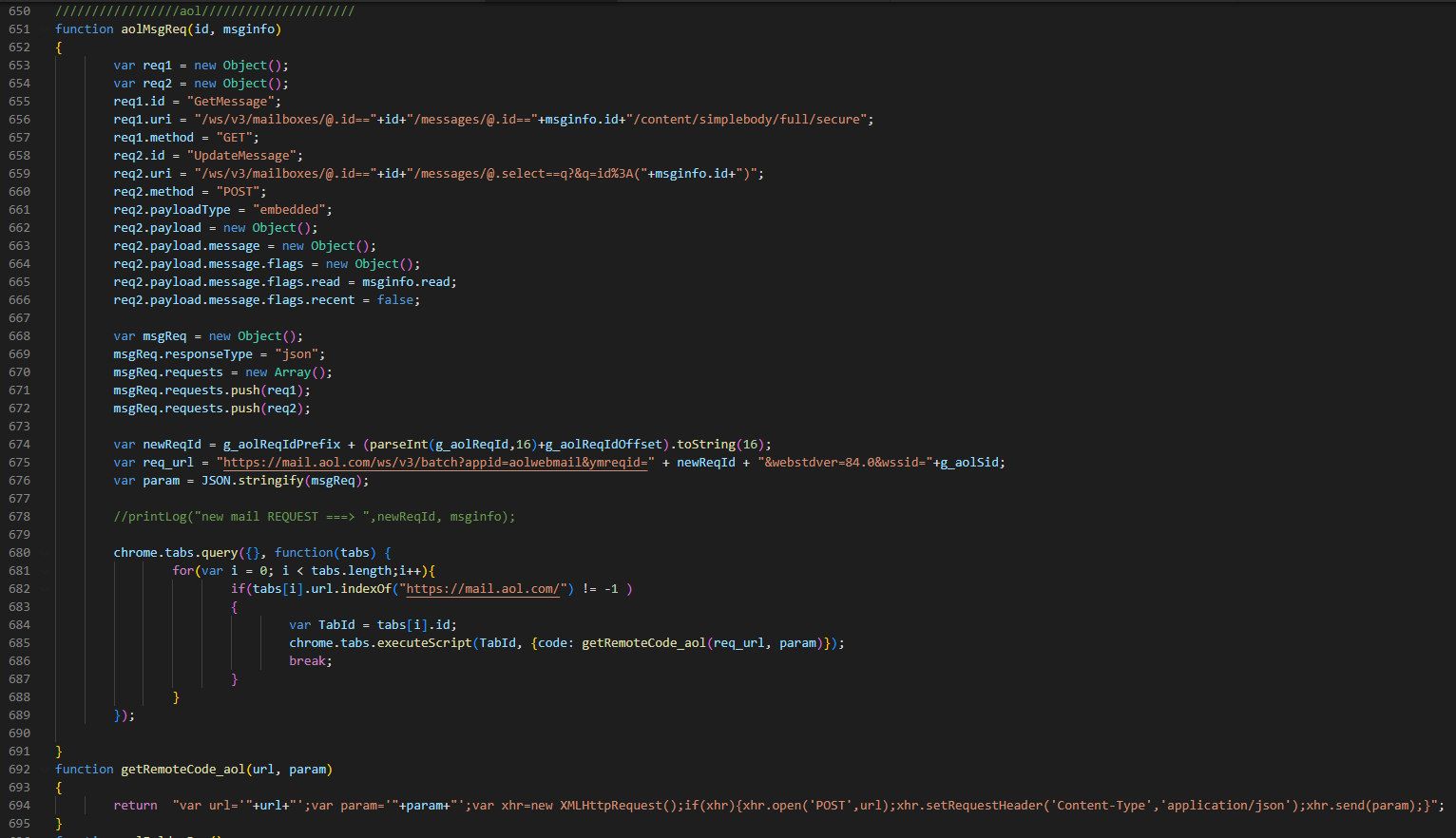 The malicious extension can perform the following requests:

SHARPEXT uses several global variables to maintain knowledge of its current state and prevent duplication of stolen data. Information stored in these variables includes, but is not limited to, the following:

A summary of the orchestration of the different SHARPEXT components is given in Figure 8:

The use of malicious browser extensions by North Korean threat actors is not new; this tactic has typically been used to infect users as part of the delivery phase of an attack. However, this is the first time Volexity has observed malicious browser extensions used as part of the post-exploitation phase of a compromise. By stealing email data in the context of a user's already-logged-in session, the attack is hidden from the email provider, making detection very challenging. Similarly, the way in which the extension works means suspicious activity would not be logged in a user's email “account activity” status page, were they to review it.

Deployment of SHARPEXT is highly customized, as the attacker must first gain access to the victim’s original browser Security Preferences file. This file is then modified and used to deploy the malicious extension. Volexity has observed SharpTongue deploying SHARPEXT against targets for well over a year; and, in each case, a dedicated folder for the infected user is created containing the required files for the extension.

Volexity has followed the evolution of SHARPEXT due to several engagements handled by its incident response team. When Volexity first encountered SHARPEXT, it seemed to be a tool in early development containing numerous bugs, an indication the tool was immature. The latest updates and ongoing maintenance demonstrate the attacker is achieving its goals, finding value in continuing to refine it. Volexity’s own visibility shows the extension has been quite successful, as logs obtained by Volexity show the attacker was able to successfully steal thousands of emails from multiple victims through the malware's deployment.

To generically detect and investigate attacks such as these, Volexity recommends the following:

To prevent these specific attacks, Volexity recommends the following:

If you suspect you have been targeted by SharpTongue, please feel free to contact Volexity.