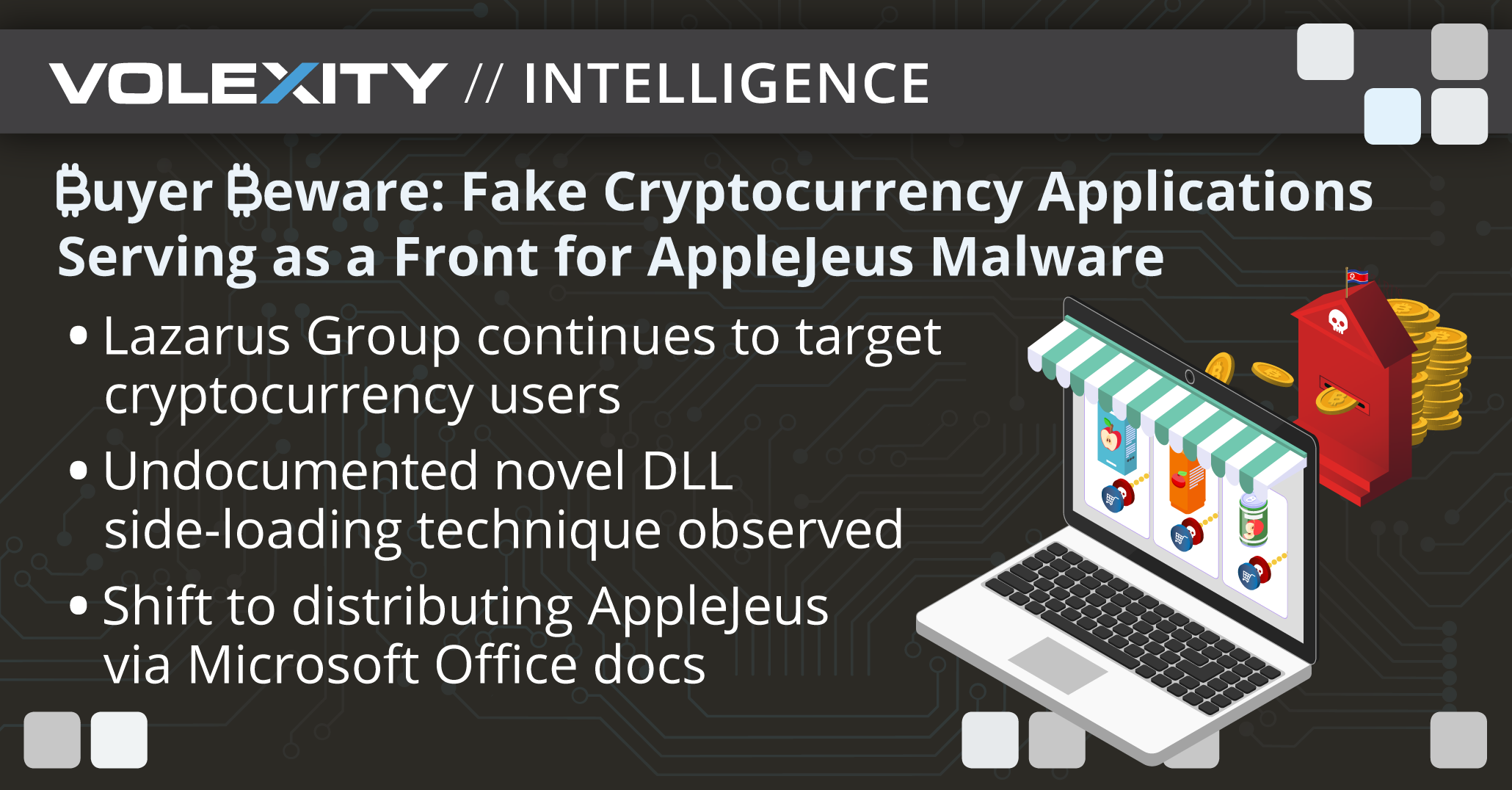 Over the last few months, Volexity has observed new activity tied to a North Korean threat actor it tracks that is widely referred to as the Lazarus Group. This activity notably involves a campaign likely targeting cryptocurrency users and organizations with a variant of the AppleJeus malware by way of malicious Microsoft Office documents. Volexity’s analysis of this campaign uncovered a live cryptocurrency-themed website with contents stolen from another legitimate website. Further technical analysis of the deployed AppleJeus malware uncovered a new variation of DLL side-loading that Volexity has not seen previously documented as in the wild.

This blog outlines new techniques used by the Lazarus Group, analyzes recent AppleJeus malware variants, shares indicators from other versions of this malware, as well as outlines links between this activity and historic campaigns. The end of the post includes detection and mitigation opportunities for individuals or organizations likely to be targeted by this activity. As with all Volexity blogs, related indicators can be found on here on Github.

In June 2022, the Lazarus Group registered the domain name bloxholder[.]com, and then configured it to host a website related to automated cryptocurrency trading. Further investigation revealed that this website was largely a clone of the legitimate website, HaasOnline (haasonline[.]com. All “HaasOnline” references were changed to “BloxHolder” and a handful of other updates were made throughout. A comparison of the two websites can be seen below (Figure 1).

Figure 1. The legitimate website (left) and the clone (right)

Volexity discovered the fraudulent BloxHolder website after identifying a new AppleJeus malware sample that was bundled as part of a Microsoft Installation (MSI) file. This discovered file, the  “BloxHolder application”, is actually another case of AppleJeus being installed alongside the open-source cryptocurrency trading application QTBitcoinTrader that is available on GitHub. This same legitimate application has previously been used by the Lazarus Group, as documented in this report from CISA. The MSI file is used to install both the malicious and legitimate applications at the same time. File details are provided below:

The MSI file installs the legitimate application while also creating a scheduled task and additional malicious files in the folder “%APPDATA%\Roaming\Bloxholder\”. The files created in this directory are shown in the screenshot below (Figure 2).

It is in “CameraSettingsUIHost.exe” that the novel DLL side-loading occurs.

As a quick primer, when an executable attempts to load a library (DLL) in Windows, it will look for this library in a set order of locations. This process is documented by Microsoft here. Therefore, by placing a malicious DLL in the same folder as the calling application, an attacker can ensure it is loaded before a legitimate DLL of the same name in the system directory. This is conventional DLL side-loading (Figure 4).

The novel technique used in this case adds a step to this process.  The legitimate application loads a legitimate DLL from the “System32” directory, and then that DLL causes the loading of a malicious DLL from the application’s directory. Specifically, “CameraSettingsUIHost.exe” loads the “dui70.dll” file from the “System32” directory, which then causes the loading of the malicious “DUser.dll” file from the application’s directory into the “CameraSettingsUIHost.exe” process. The “dui70.dll” file is the “Windows DirectUI Engine” and is normally installed as part of the operating system. This novel DLL side-loading process is illustrated in Figure 5 below.

It is not clear why the threat actor added this additional step. It could cause some confusion and slow down malware analysis, but ultimately the location of the files are still the same as using the conventional method.

In a non-subtle manner, Volexity noted the internal name of DUser.dll to be HijackingLib.dll. Its purpose is to decode and load a PE file passed as the first argument on the command line, using a key passed as the second argument.

As shown in the scheduled task in Figure 3, the name of the encoded PE file was “18e190413af045db88dfbd29609eb877”, and the second argument on the command line, “lion”, is the XOR key used to decode the file. The XOR is 8 bytes in length. If the supplied key is smaller, it is padded with null bytes. The decoded PE file is a downloader. Volexity identified two variants. The first variant is not obfuscated.

Its purpose is to collect information on the infected system and download shellcode from the command-and-control (C2) server. The following data is collected:

This system data is likely collected to identify if the infected system is a virtual machine or sandbox, or if it is a genuine victim. These details are sent to the C2 and the malware expects the response to contain shellcode to execute. Volexity did not receive any additional payload at the time of analysis.

An example of the POST request used to send this data is given below:

Figure 6 shows the pseudocode that builds this request structure.

This malware is a variant of the AppleJeus malware. The network communication is similar to that described in previous reporting by Kaspersky and CISA. Volexity identified several other MSI files with cryptocurrency themes that are linked to this campaign. While these are not referenced in detail here, they are included among the IOCs. Analysis of those additional MSIs resulted in the identification of a second AppleJeus variant, which is heavily obfuscated and has a different network protocol.

All strings and API calls are obfuscated using a custom algorithm. The network request follows this pattern:

The network requests made by these newer samples match those of historical AppleJeus malware samples.

In October 2022, Volexity discovered in a minor departure from the Lazarus Group’s typical method of installing AppleJeus via an MSI installer. This new method uses a malicious Microsoft Office document. Details of this document are below:

The document uses embedded macros to deploy malware on the target system. Figure 7 shows the decoy content displayed to the user.

The document contains a macro split into two parts. The purpose of the first part is to decode a base64 blob that contains a second OLE object containing a second macro. The initial document also stores several variables, encoded using base64, in a form object (Figure 8).

Figure 8. Configuration data for the macro stored in a form object

The variables shown in Figure 8 are used by the second macro to define where the malware will be deployed on the infected system. The decoded values are shown below:

The ultimate purpose is to download a remotely hosted payload from public file-sharing service, OpenDrive. Figure 9 shows the URL from where the payload is downloaded.

While the file was no longer available at the time of analysis, based on public sandbox results for the file in question, the downloaded payload, “Background.png”, embeds the following three files:

The three files are dropped on disk using hardcoded offsets that can be found in the second macro. The file paths are computed from the base64 variables mentioned previously. Figure 10 shows the writing of the files. 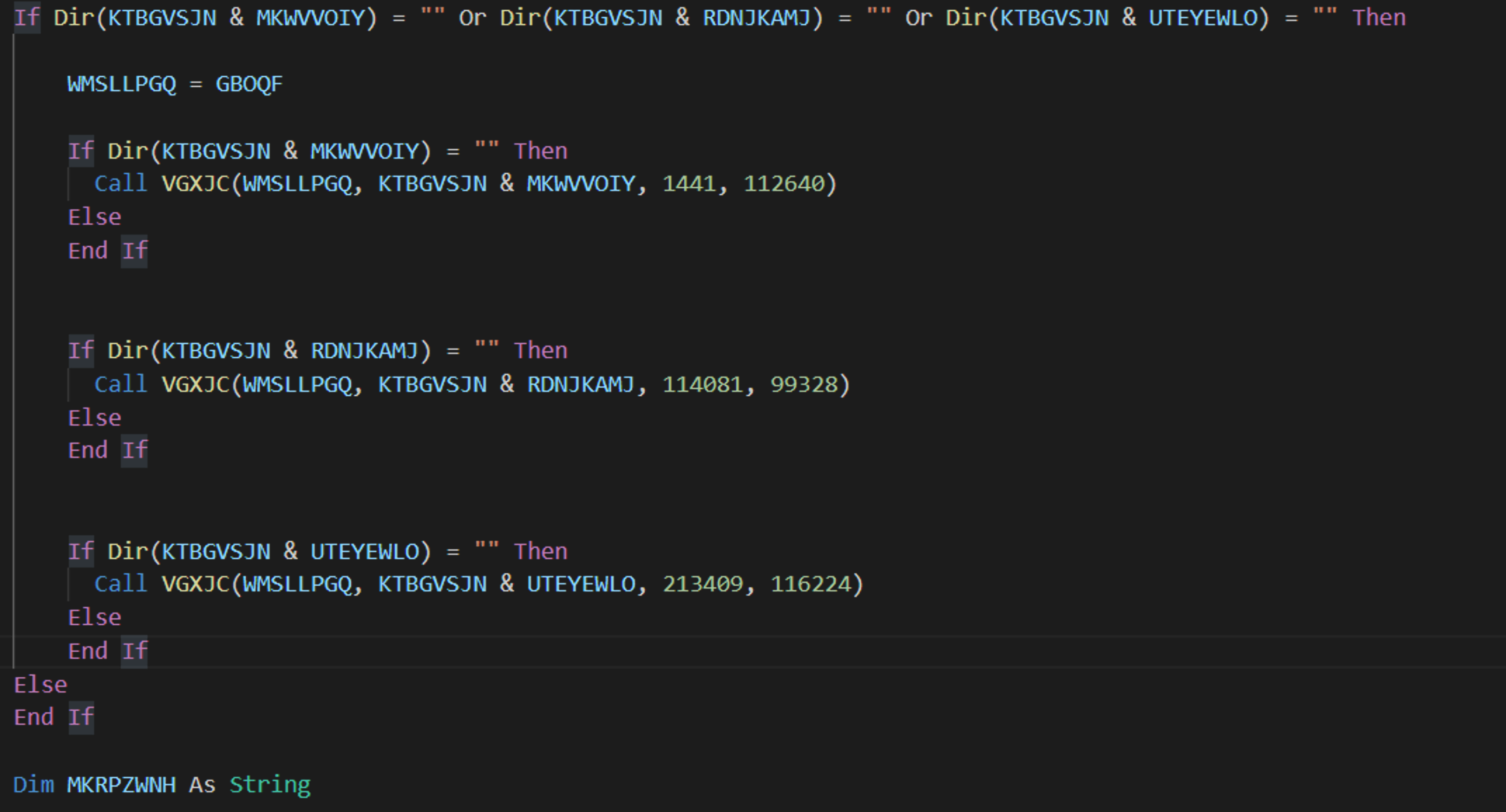 Despite not having access to the final payload, Volexity assesses this is related to the same Lazarus Group campaign based on the following factors:

The following table describes similarities Volexity has identified between the campaign described in this blog and the overview of historical campaigns described by CISA.

The PE metadata structure of the files used in the current campaign and historical campaigns follow similar formats, shown in Figures 11 and 12 below. 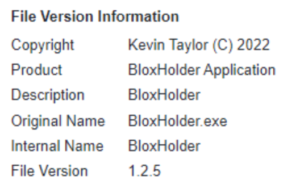 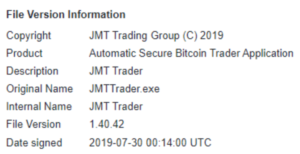 In addition to the information from the CISA report, the network protocol from the first analyzed sample is the same as the one described by Kaspersky in this report. The screenshot in Figure 13 (Kaspersky publication) shows the same protocol as that shown in Figure 6 (the first sample from this blog).

New elements of this current campaign include the following:

In February 2021, CISA published an advisory concerning the AppleJeus malware. The advisory describes the variants observed from 2018 to 2021. Volexity has identified a similar campaign taking place between June and October 2022 using new variants of AppleJeus. The campaign from June 2022 follows the same broad pattern as the one described by CISA: a cryptocurrency application packaged in a malicious MSI file.

The dropped payloads in the recent campaign abuse DLL side-loading techniques to execute the next stage. But the DLL side-loading implementation was not always standard. In some cases, it was performed by proxy, where the EXE calls a DLL that subsequently calls the attacker’s DLL. It is interesting to note that the malicious side-loaded library has strong obfuscation of all strings and API calls, making static analysis more complex.

Also newly observed was the shift, discovered in October 2022, from the use of MSI files to malicious Microsoft Office documents. The Microsoft Office documents use an OLE object with a macro dynamically loaded from another macro. This technique seems to reduce static detection by security products, and it deviates from what is now a publicly well-documented campaign.

The Lazarus Group continues its effort to target cryptocurrency users, despite ongoing attention to their campaigns and tactics. Perhaps in an attempt to allude detection, they have decided to use chained DLL side-loading to load their payload. Additionally, Volexity has not previously noted the use of Microsoft Office documents to deploy AppleJeus variants. Despite these changes, their targets remain the same, with the cryptocurrency industry being a focus as a means for the DPRK to bolster their finances.

To generically detect and investigate attacks like the one described in this blog, Volexity recommends the following:

To prevent these specific attacks, Volexity recommends the following:

Volexity's Threat Intelligence research, such as the content from this blog, is published to customers via its Threat Intelligence Service and was covered by TIB-20221103. Volexity Network Security Monitoring customers are also covered automatically through signatures and deployed detections from the threats and IOCs described in this post.

If you are interested in learning more about these products and services, please do not hesitate to contact us.

Related IOCs include the following: