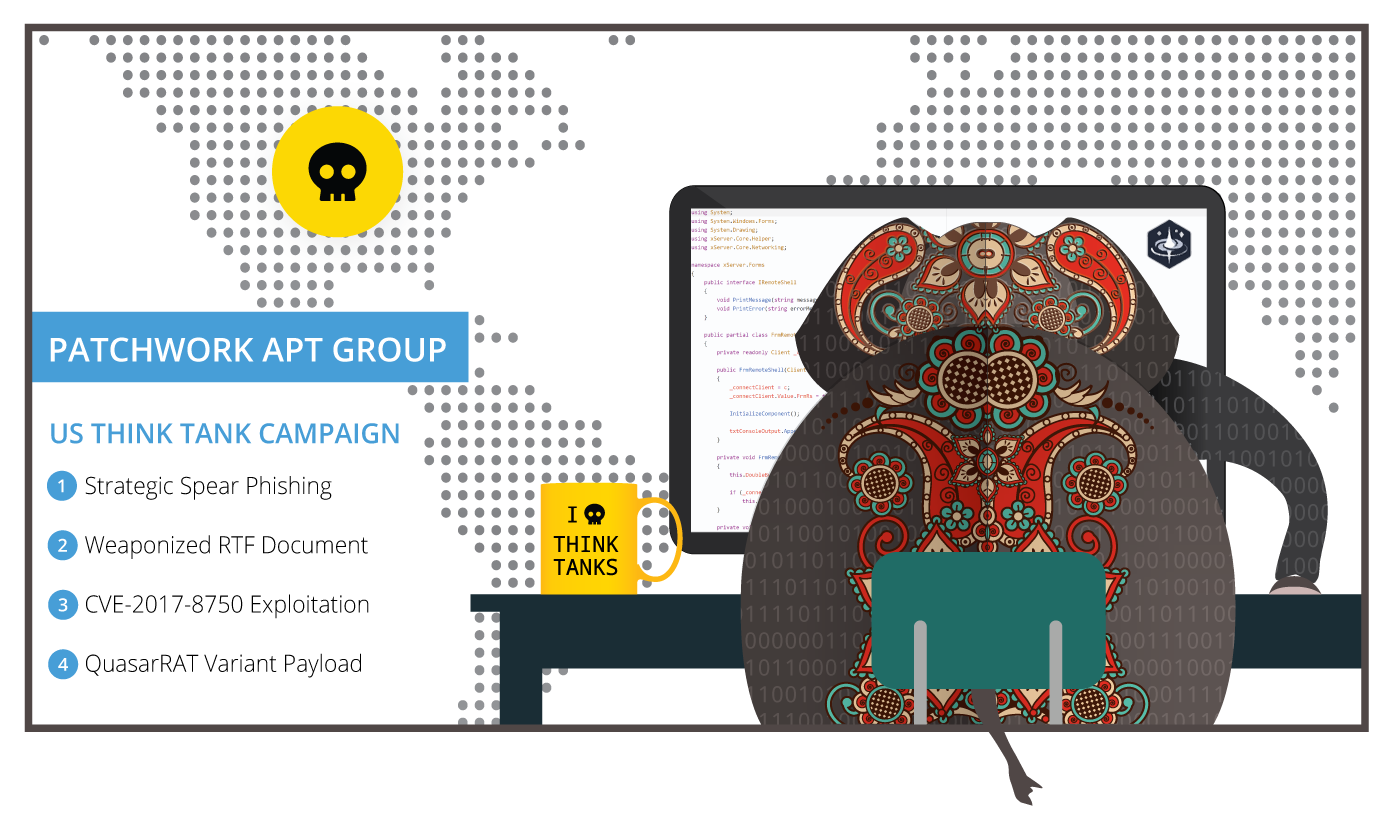 In March and April 2018, Volexity identified multiple spear phishing campaigns attributed to Patchwork, an Indian APT group also known as Dropping Elephant. This increase in threat activity was consistent with other observations documented over the last few months in blogs by 360 Threat Intelligence Center analyzing attacks on Chinese organizations and Trend Micro noting targets in South Asia. From the attacks observed by Volexity, what is most notable is that Patchwork has pivoted its targeting and has launched attacks directly against US-based think tanks. Volexity has also found that, in addition to sending malware lures, the Patchwork threat actors are leveraging unique tracking links in their e-mails for the purpose of identifying which recipients opened their e-mail messages.

In three observed spear phishing campaigns, the threat actors leveraged domains and themes mimicking those of well-known think tank organizations in the United States. The group lifted articles and themes from the Council on Foreign Relations (CFR), the Center for Strategic and International Studies (CSIS), and the Mercator Institute for China Studies (MERICS) for use in their spear phishing lures and malicious Rich Text Format (RTF) documents. Strangely, in one case, the threat actors also appear to have used a domain name similar to the Foreign Policy Research Institute (FPRI) in a message purporting to be from CFR. Each of the spear phishing attacks contained links to .doc files, which were really RTF documents that attempt to exploit CVE-2017-8570 (Composite Moniker). The threat actors appear to have leveraged publicly available exploit code that can be found on Github at the URL: https://github.com/rxwx/CVE-2017-8570. If the exploit is successful, the threat actors will attempt to drop and execute QuasarRAT. Details of the malware and the associated attacks are listed below.

Each e-mail was sent from the attacker-controlled domain mailcenter.support. This domain was not only used to send the phishing e-mails, but also to track which targets opened the e-mail. Within each of the HTML-formatted messages, an embedded image tag is used to beacon home to the attacker's domain, containing an unique identifier specific to the recipient.

While the use of e-mail recipient tracking, a linked RTF document, and a final payload (QuasarRAT variant) remained the same, certain elements differed across campaigns observed. Details on each of the messages are listed below.

The image below shows an example of how the spear phishing message would look to a recipient. 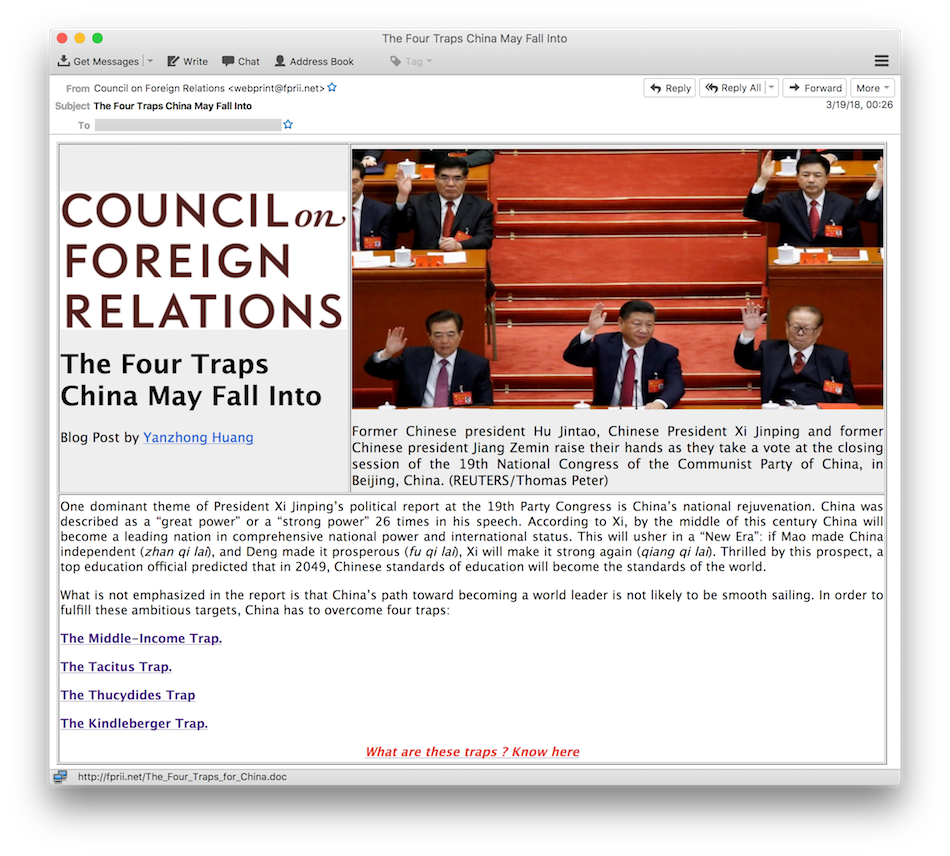 Upon opening the above attachments, the recipient will be presented with a document that is a direct copy of a blog post or report released by the think tank organization being impersonated. At first glance, everything might look legitimate, but in the background the target user has likely just been infected with QuasarRAT. QuasarRAT is a freely available "remote (administration|access) tool" (RAT) written in C# and distributed via Github. This RAT provides a variety of functionality that makes it particularly attractive to an attacker. This includes, but is not limited to, the following:

The images below are what a target user opening a malicious RTF document would see from within Microsoft Word. 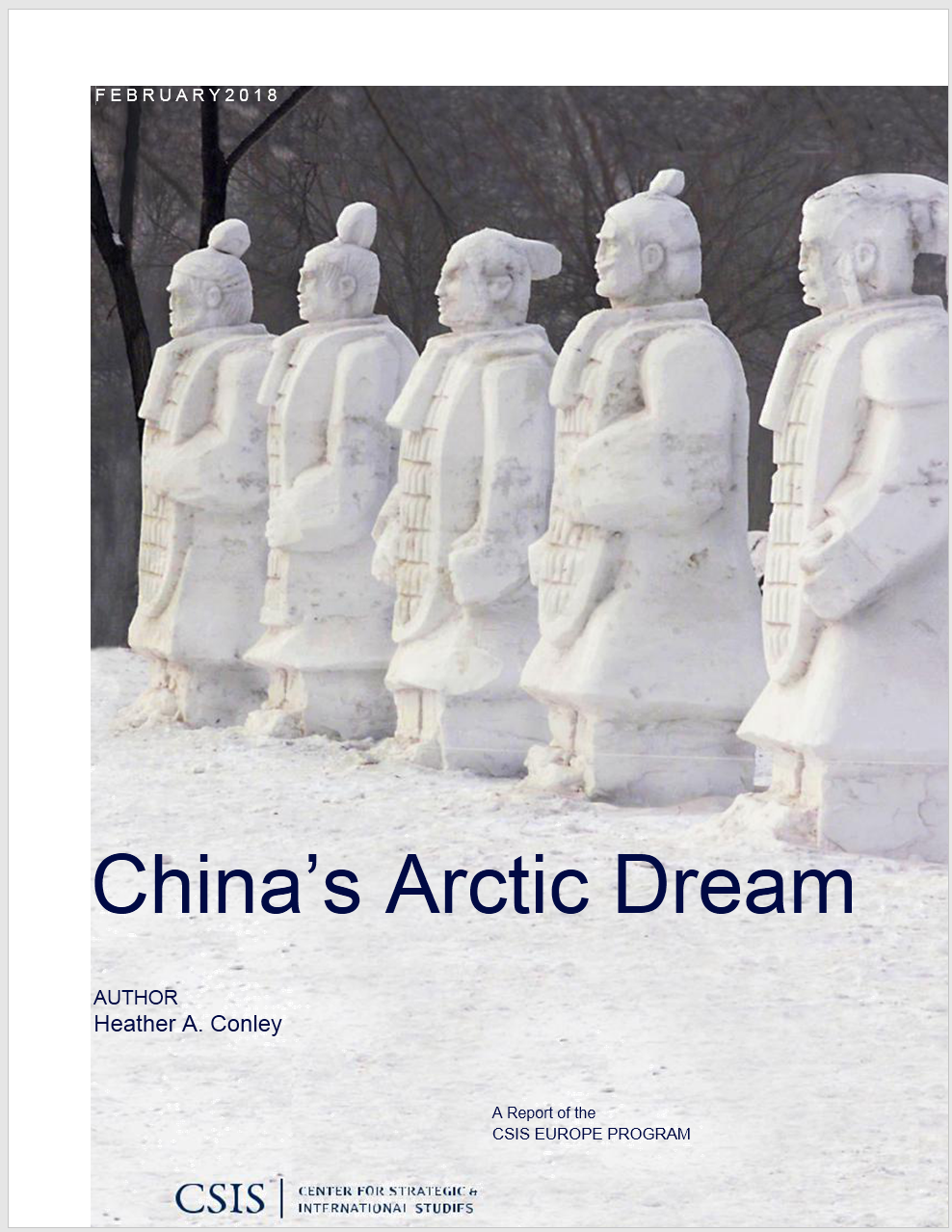 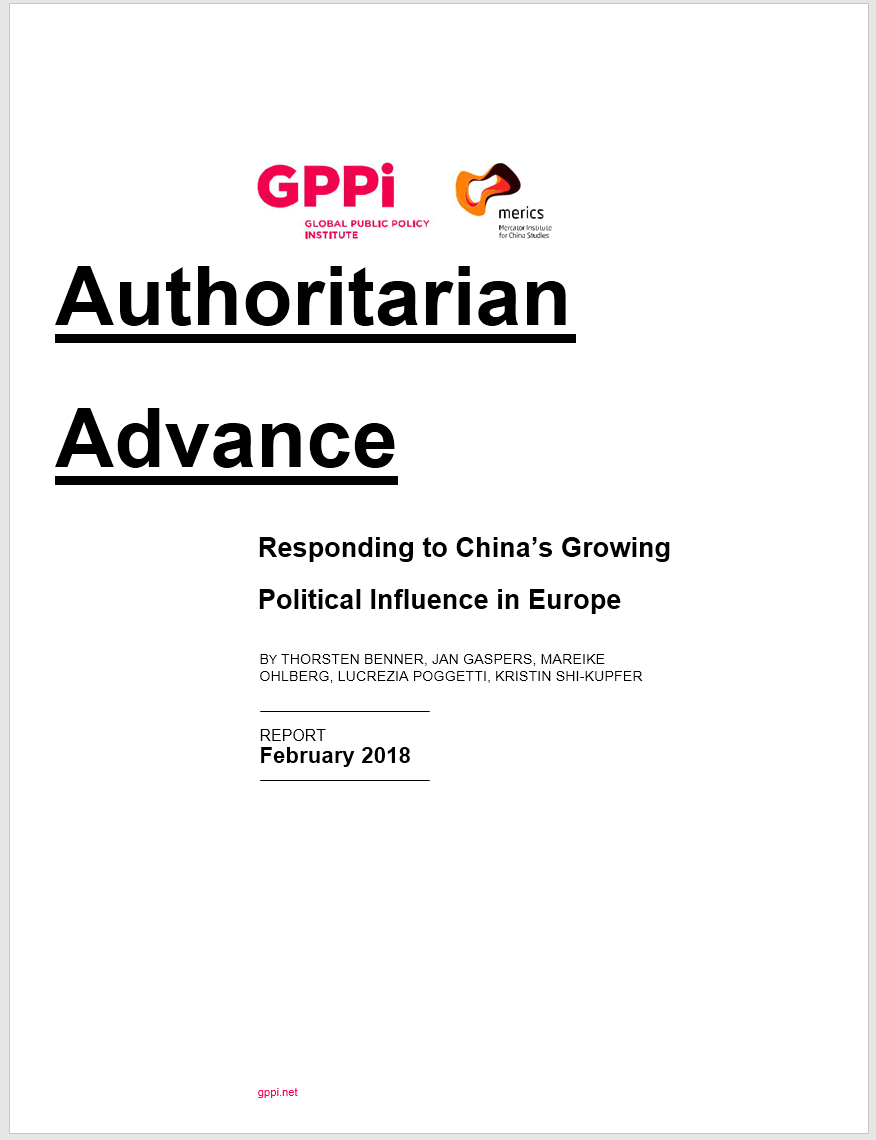 Note: The scriptlet code is an exact match to that shown on the Github page referenced earlier for CVE-2017-8570. The string "fjzmpcjvqp" is unique and not something likely to be present if the code was not generated with the same public POC exploit code.

The malware also contains an embedded .NET wrapper DLL for creating and managing scheduled tasks on Windows systems. The file, named Microsoft.Win32.TaskScheduler.dll, is digitally signed by a certificate from AirVPN. 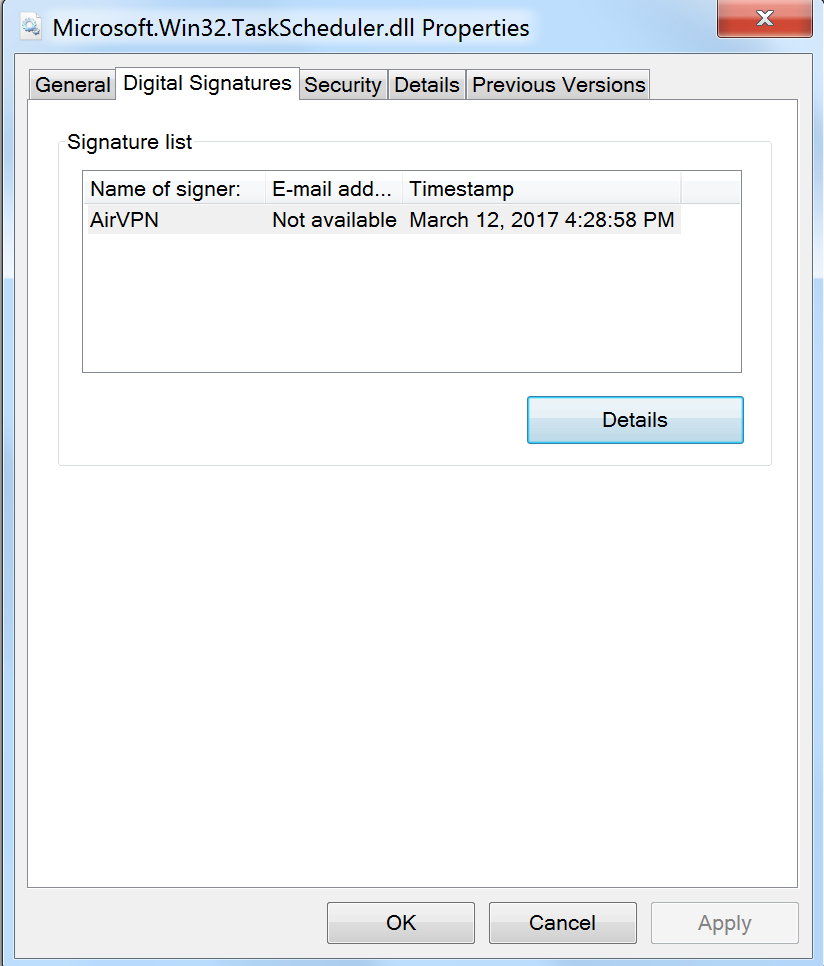 This DLL is used to create a scheduled task that points to the QuasarRAT binary, microsoft_network.exe, allowing it to remain persistent after reboot.

As seen in the image above, the QuasarRAT scheduled task is named Microsoft_Security_Task and runs at 12:00 AM each day. Once the task is triggered, it will then repeat every 5 minutes for 60 days. When executed, microsoft_network.exe will initiate a request to freegeoip.net in order to determine the geographical location of the infected host. Immediately following the request, the malware will begin to beacon over an encrypted connection to the threat actor's command and control domain tautiaos.com (43.249.37.199). Several related samples were identified and are included in the File Indicators section below.

The addition of US-based think tanks to the list of organizations in the crosshairs of Patchwork shows an increasing diversity in the geographic regions being targeted. While there were a few peculiar components to some of the spear phish messages, the campaigns and themes were strategically relevant to the organizations being targeted. The Patchwork threat actors also appear to have adopted a technique seen from other APT groups where they are now tracking the effectiveness of their campaigns by recording which recipients have opened the phishing message. This information allows a threat actor to determine if their messages were delivered, which users are more susceptible to opening them, and basic information regarding the target's operating system and e-mail client (or browser). Finally, although the payload observed being delivered by Patchwork in these campaigns is a readily available open source RAT, it does allow for flexibility in interacting with compromised machines without needing to use custom malware. Volexity is actively tracking this group and the infrastructure currently in use for the benefit of its network security monitoring and threat intelligence customers.