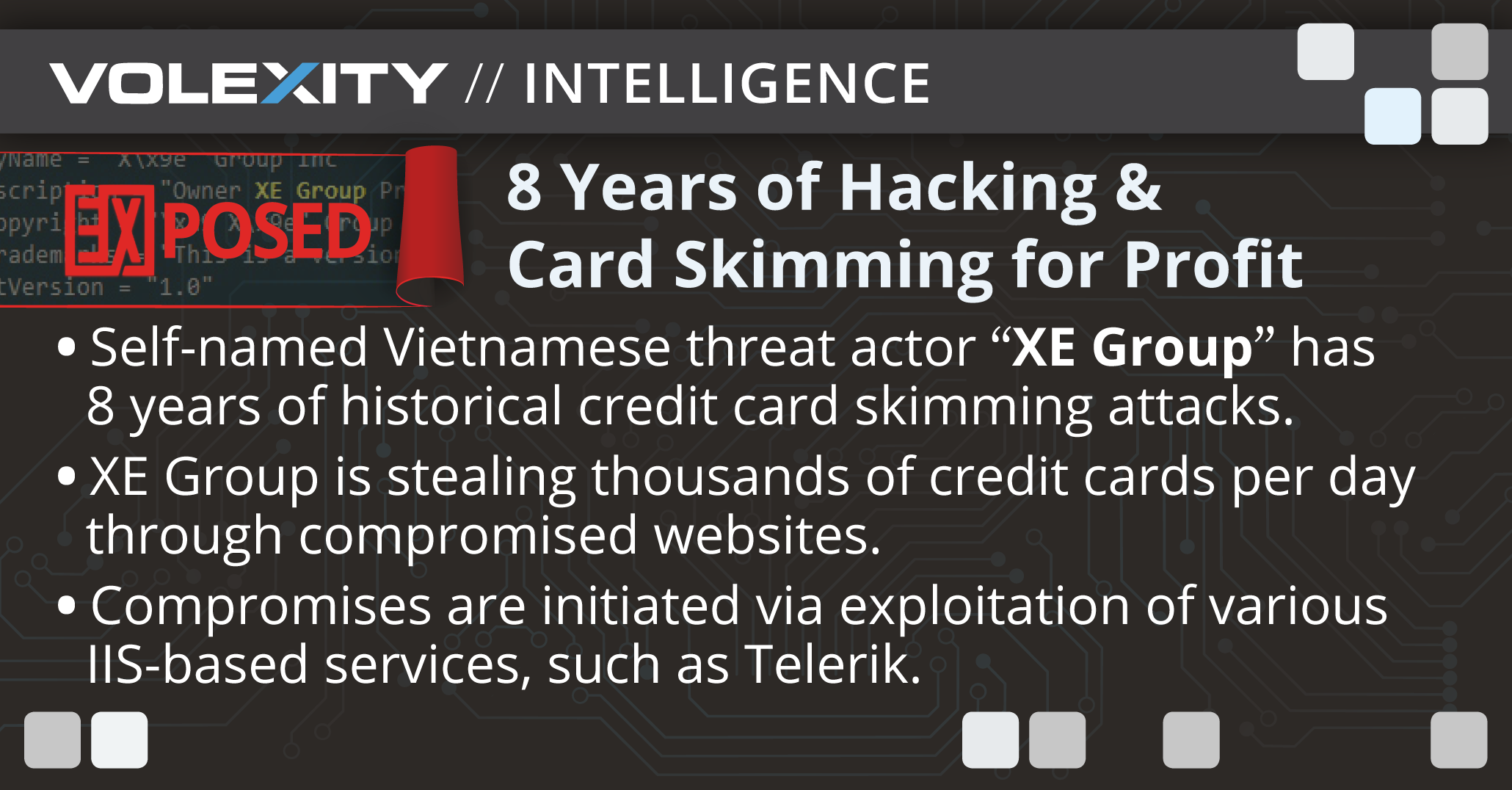 There has been previously reported XE Group activity in a blog by Malwarebytes from 2020; this post serves to provide additional  insight into XE Group and an update on its current operations.

Volexity first encountered XE Group activity in early 2020 following a web server compromise at a customer site. The breach of the web server was automated, and it was remediated quickly after discovery, with no notable actions taken by the attacker. That one incident was a small blip on the radar and appeared rather isolated. Recently, however, Volexity detected XE Group activity across several of its customers by way of Volexity's Network Security Monitoring service. This time, the activity was coming from client systems rather than web servers. A deeper dive into the activity revealed clients were visiting compromised websites and potentially falling victim to a widespread credit card skimming operation.

After finding this new XE Group activity, Volexity investigated and quickly found infrastructure used by the attacker. In many cases, it was not difficult to enumerate the attackers' infrastructure using basic pivots such as WHOIS registrants and passive DNS. Much of this infrastructure still tied back to items described in the aforementioned Malwarebytes blog. The attacker uses email addresses relating to “xe[word]” and has consistently used the same custom nameservers (ns1.xegroups[.]com and ns2.xegroups[.]com) with their domains for a number of years.

An overview of the infrastructure used in the last three years is given in Figure 1 below. A full list can be found on Github here. 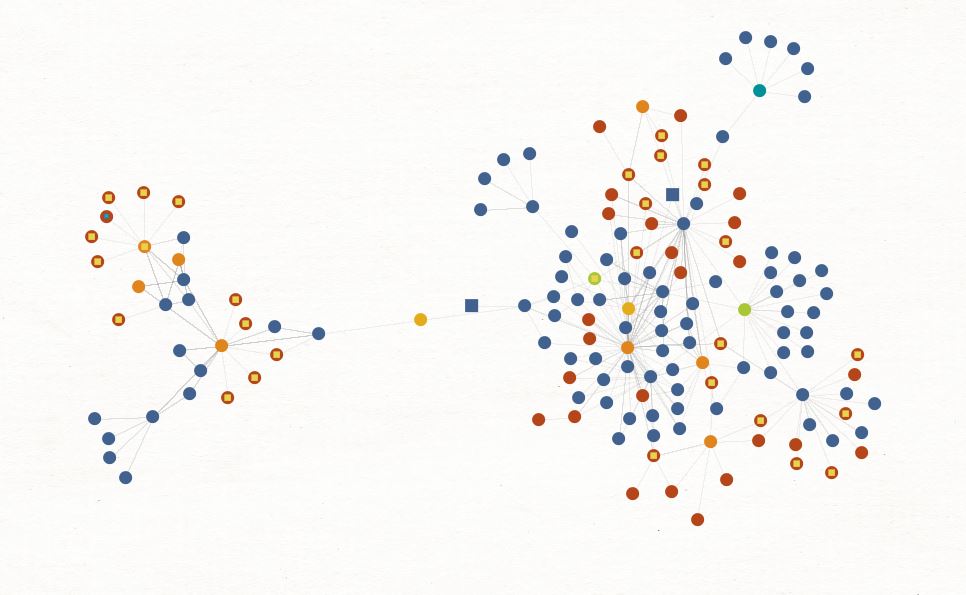 Figure 1. XE Group infrastructure can be closely linked via passive DNS, WHOIS data, and other patterns

Sometimes, the attacker even labels their malware as belonging to XE Group, as shown below:

Figure 2. Sometimes the malware authors label malware with their brand.

Despite this, the bread and butter of attacks from XE Group is credit card skimming, and the other tools Volexity has identified are only used to help facilitate this purpose.

The most recent credit card skimming activity identified by Volexity was found based on suspicious redirects to the domain “object[.]fm”, a domain using the xegroups[.]com nameserver.  The code used to load the malicious JavaScript from this page reveals that the attacker uses an interesting technique: the JavaScript keyword "object" is used to populate the domain value:

The effect of this code is to append a script to the loading page where the "src" value is as follows:

Since typeof({}) evaluates to "object", this becomes:

Volexity searched for other websites containing similar scripts to load additional JavaScript and found that the attacker is using the same method to load scripts from the domain "object.sbs".

The gmt.js file loaded on infected sites is used for credit card skimming and shares much of the same code as the original skimmer identified by Malwarebytes. The effect of the credit card skimmer is that any form data submitted to pages loading the JavaScript in question is also exfiltrated to an attacker URL. An example of the type of form data stolen is shown below:

The new version of the credit card skimming code shows slight differences to the 2020 version:

Here, "k" is a JavaScript Object; "r" takes the current location (e.g., the current URL) as a string and replaces the entire location with the contents of "k" (i.e., "object").

Additionally, in some cases the attacker appears to find the results of their standard credit card skimmer are insufficient or hard to parse, so they have included additional code to skim specific fields from compromised sites, an example of which is given below:

After identifying a number of attacker command-and-control (C2) servers, Volexity searched various data sources—including its own telemetry—in order to discover websites that are compromised and hosting the credit card skimmer described above. Compromised sites vary a great deal in popularity and nature; examples of compromised sites include the following industries/sectors:

The variety of affected sites suggests no clear strategy on the attacker's part, and therefore suggests it may be a case of attempted bulk exploitation and indiscriminate attacks.

In one case, however, the attacker appears to have been able to compromise a web design company that specializes in designing and maintaining websites for storefronts. This means that each site owned by that company is currently serving a credit card skimmer.

Who Is XE Group?

Volexity believes XE Group is likely a Vietnamese-origin threat actor; several things led to this conclusion. First, the WHOIS information for several of the malicious domains is for an individual located in Vietnam:

While this information is often faked, there is indeed a user with the name “Joe Nguyen”, username "xethanh", with an empty repository “xegroupdev” present on GitHub.

This is a largely unused GitHub profile using a custom "XE" avatar and referencing both "Joe Nguyen" (the same name seen in the previously mentioned WHOIS records) and "xegroupdev".

Users with the same name exist on other carding forums as well, such as cybercarders[.]su and cardingforum[.]co. In a non-malware twist, there is also a YouTube profile with the handle "xethanh" which uses the same name and XE avatar as the Github profile.

Figure 8. YouTube profile for user "xethanh" with the same avatar and username as the previously mentioned Github profile

Crucially, in the About section of the YouTube profile, there is a link to xegroups[.]com/xethanh. The site xegroups[.]com is a C2 for older malware samples and a nameserver for newer infrastructure used by the group. While the name "Joe Nguyen" may be a pseudonym, it seems most likely that the user behind the GitHub and YouTube accounts is the attacker.

It could be that XE Groups is a compromised organization of some kind, but this seems unlikely since a number of the tools used by the attacker over a long period of time has used "xe[word]" nomenclature in descriptions, original filenames, and PDB strings. Furthermore, a number of the malware files discovered in VirusTotal were first observed being uploaded from Vietnamese web users, many of whom only have a single VirusTotal upload. It is likely these were uploaded by the attacker in order to test detection rates of their malware prior to deploying them in real environments.

There is a relatively clear trail of evidence to help identify XE Group. The attacker appears to be of Vietnamese origin. They often use the brand “XE Group”, and a number of "xe[word]" themed domains have been registered and linked to the group. Volexity has identified a likely persona on carding forums associated with this activity, which suggests the attacker monetizes stolen credit card data through sales rather than direct use of stolen cards themselves. The persona used for the GitHub and carding account, and several of the domains, have a history going back to 2013, which suggests the attacker may have been attempting similar attacks for up to eight years, with only one significant public mention of their activity. The oldest malware sample Volexity was able to identify relating to XE Group dates back to late 2014.